i know fed fans want to believe, but how are some of you optimistic

icedevil0289 said:
@falstaff78 will you be doing a cumulative stat post for fed/nadal going into this match?
Click to expand...

Anything other than a straight set loss to Nadal would be a bonus in my book at this stage. If he wins it would be nothing short of a miracle.

But Fed has had an amazing tournament regardless. Playing in the semis here at almost 38 is simply redicilous. Very proud of him

D.Nalby12 said:
If Federer brings his "I have nothing to lose" mentality like AO2017 - he could keep this match very close.
Click to expand...

But still lose in what would likely be straight sets.

Let's see... Federer blows 20 break points against tired Wawrinka. Hmmmmm... let me do some math on this.... nah... unnecessary.

Does nadal want revenge? He might be out for blood.
A

A total disaster for the mighty fed
A

icedevil0289 said:
i know fed fans want to believe, but how are some of you optimistic
Click to expand...

You gotta have some faith in your hero!

In the match against Stan, I could see you freaking out at every BP Roger squandered. I am not blaming you but just saying have faith! At the end , if he loses move on.
A

Can someone check the odds were when Tyson played buster Douglas

I just vote for Fedr in 3 for the Lolz

AndyM said:
Can someone check the odds were when Tyson played buster Douglas
Click to expand...

Call me crazy, I believe in the upset. I honestly think Roger Federer will upset Rafa

Feather said:
Call me crazy, I believe in the upset. I honestly think Roger Federer will upset Rafa
Click to expand...

I can see it. Cool and damp conditions. Hot and dry nadal would be too much.

35.2% of voters predicting a Federer win. Seriously guys come one. Use head not heart otherwise it's false. Would love to say Fed but just can't see anything other than Nadal in straight sets with maybe 1 set being close.

I just hope Fed is fit after the match, have a feeling he will go down 2-3-2 or something along those lines

I'm a huge Fed fan but even I think Rafa will win this one. I'm just hoping for a respectable scoreline, but if by some miracle Roger were to win then I would be ecstatic. I'm impressed that he has made it to the semi finals after this long off clay and at his age. He has absolutely nothing to be ashamed of if he loses on Friday. I will be cheering him on regardless.

If Federer beats Nadal he will be in 2nd Place in the ATP ranking without an RG 2019 win,, 2nd place with Grass season coming up fits Federers plans.

Can Bull save tennis again on Friday?

Past performance is an indicator of future results, right?

No, this irrelevant.
AO match, remenber?. Nadal had one less day of rest and a semifinal match much more demanding than Federer and even so he was 9 points of victory. I forgot it was on fast harcourt, too.
Now the conditions are totally different. they are the best of 5 sets on clay, Federer is tired, and the Spaniard comes with confidence.
If you talk about background, it is much better to refer the crushing 13 to 2 on this surface and especially the 5 to 0 blushing in favor of the Spaniard in their clashes at Roland Garros.
If it is in 3 or 4 sets, you will have to see if the weather helps the Swiss a bit but the result is already written in favor of Nadal.

weakera said:
Can Bull save tennis again on Friday?
Click to expand...

I also hope he will lose.

Fed seemed to strike the ball a little better today against Stan than I've seen lately. Hopefully he plays like he has nothing to lose, because he doesn't, and goes for shots and we get a decent match. Don't know if Fed can take a set, but that would be the goal.

Night Slasher said:
I also hope he will lose.
Click to expand...

Night Slasher said:
I also hope he will lose.
Click to expand...

I see what you did there...

And another fail for you. How sad. 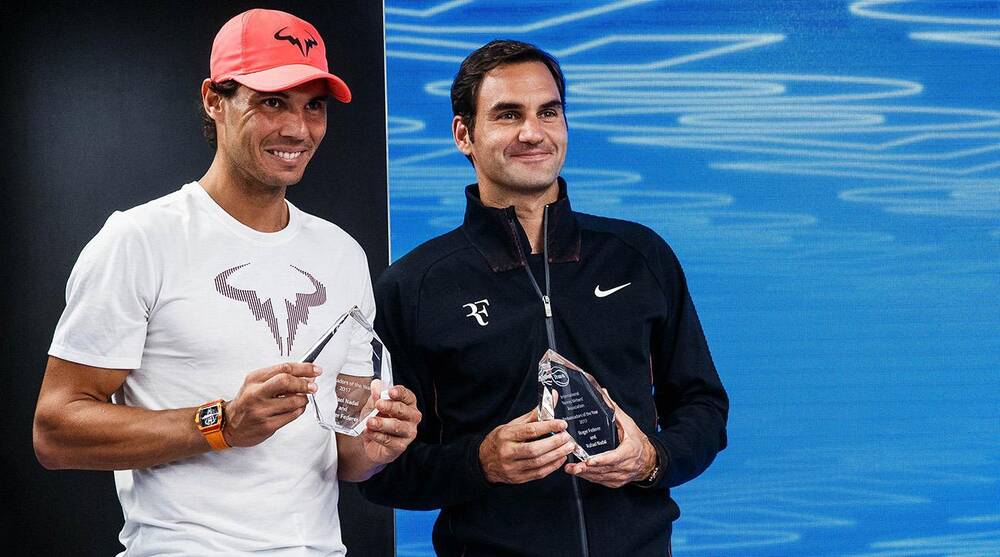 Federer should just forfeit to avoid embarrassment, no?
Click to expand...

Btw where is this pic from?
A

Although it is unlikely with two full days of rest, I think there should be an option for Nadal to win by w/o.

Ultimate tennis stats has Roger's chances at 33.3%, so this poll is absolutely spot on.

Sephiroth said:
Btw where is this pic from?
Click to expand...

Looks like it was from when they shared the award for Ambassador of the Year a couple of years back.

weakera said:
And another fail for you. How sad.
Click to expand...

I'm sure you will disappear forever from this forum if Rafa loses by any chance. Now that's sad, lol.

uscwang said:
Although it is unlikely with two full days of rest, I think there should be an option for Nadal to win by w/o.
Click to expand...

What total BS. Are you hoping for Fed to break his leg while slipping in the shower? Maybe you need to reflect on your guy retiring in 11 matches in his career, including in 3/4 majors.

Walkover? And don't mention Rome when he played three matches in two days at almost 38. Fed is not giving Nadal a walkover and any tennis fan who has watched the game for more than 2 years would know that.

weakera said:
Can Bull save tennis again on Friday?
Click to expand...

If I were Nadal, i would use the match to dampen Federer's winning chance, for Wimbledon.
Psychologically and physically.

uscwang said:
If I were Nadal, i would use the match to dampen Federer's winning chance, for Wimbledon.
Psychologically and physically.
Click to expand...

Yeah, and Wimbledon is played on clay

Sephiroth said:
Btw where is this pic from?
Click to expand...

US Open 2017, interview before the tournament started.

I reckon it must be. His back odds in the betfair betting exchange are currently 8. I can't think of any other match he has played were his odds would have been so long. Perhaps his other matches against Nadal at the FO?

"Like against any player, there is always a chance. Otherwise nobody will be in the stadium to watch because everybody already knows the result in advance," said the 20-time Grand Slam champion.

"That's exactly what everybody believes by facing Rafa. They know it's going to be tough. But you just never know. He might have a problem. He might be sick. You never know.

"You might be playing great or for some reason he's struggling. Maybe there's incredible wind, rain, 10 rain delays. You just don't know. That's why you need to put yourself in that position."

"The complete dream would be to win the tournament," said Federer. "Other players won't agree. It will be difficult, but I believe it anyway.

"For me to get to Rafa is not simple. It took five matches here for me to win to get there.

"That's why I'm very happy to play Rafa, because if you want to achieve something on the clay, inevitably, at some stage, you will go through Rafa, because he's that strong and he will be there.

"I knew that when I signed up for the clay that hopefully that's gonna happen."

Unfortunate about the bolded part. Even if he were to beat Nadal somehow, he would get pulverized by Djoko in the final.

That's the problem. For him to win RG, he would need to take down both Nadal and Djokovic. That's a very hard task.

Doctor/Lawyer Red Devil said:
Looks like it was from when they shared the award for Ambassador of the Year a couple of years back.

I wonder if Nadal or Federer even knew what on earth that association was. Probably got a phone call saying you're being handed a trophy, come on this day.

I really see this as a nice throwback, nostalgic RG clash between the two. I never expected them to face off at RG again, and here they are. Nadal is definitely going to win, in three or maaaaybe in four sets, but this occasion is definitely a celebration of everything they've done after their very first slam match, which also in the RG semi's 14 years ago. Kudos to both, here are they are yet again and similar to Rafa's great tournament at Wimby last year, Fed's RG this year (despite the fairly easy draw that he ended up with) is great proof of his high and consistent base level on all surfaces, even on his worst.
R

The thing that pisses me off is that Nadal got Fed 4 times during 2013 when Federer was battling injuries and having a career worst year. Now this year Fed plays well at Indian Wells and Nadal pulls out and Fed willingly meets Nadal at RG clay at 37 years old. It’s just ridiculous how often Nadal benefits from crap like this. The guy is an absolute weasel.

Nadal's comments on the SF:

"I really expect him to play aggressive, change rhythms, come to the net," Nadal said of Federer. "That's my feeling. He's playing well and he has the tennis to make that happen.

According to Stan, via @ericsalliot, Chatrier is a lot slower than Lenglen.