Muguruza in the final out of nowhere who had predicted her before the tournament?

Great match even tho only 2 sets. Rooting for Simona but still happy to see Garbine win again after so long. Well fought by both.
Last edited: Jan 30, 2020

tacou said:
Muguruza’s celebrations have been Safin-esque
Click to expand...

That was an incredibly muted celebration.

She’s not feeling this interview much either.

AO 2020 Women's Final - Kenin vs. Muguruza
Unique situation - unseeded player will be a favorite over the seed player in the final.

Mug is going to be move up a lot in the rankings after this win!

My 'other' vote is looking good!
S

This match was exactly like the barty and kenin match. Both barty and Simona had sps in the first set and even served for it. Both choked. And both were up a break in second set and were also serving for the set but got broken back and the opponent held, and then broke for GSM. Exact same match and score line. What are the chances?

spystud said:
She’s not feeling this interview much either.
Click to expand...

I liked how muted she's been. I get the impression she's not celebrating because the work isn't done yet. That's the kind of hunger we haven't seen from her in a while.

Lol hardcore Halep fans in this board.

I just want a good final. Hope Kenin is strong mentally unlike Ms. Von at FO last year. That was a dud.

Continental Grip said:
I liked how muted she's been. I get the impression she's not celebrating because the work isn't done yet. That's the kind of hunger we haven't seen from her in a while.
Click to expand...

The only 'relief' expression of Muguruza was at R1 and R2, both she lost a set. The rest she just has this scary looking lol. Love it.

The only 'relief' expression of Muguruza was at R1 and R2, both she lost a set. The rest she just has this scary looking lol. Love it.
Click to expand...

Think I posted a Twitter clip, but the strangest non-celebration this entire tourney was Sofia after her R1 demolition of whoever it was. She didn’t react at all, didn’t even acknowledge the crowd after shaking hands. Fast forward two weeks, & here we are. Confident young woman.

Halep--with her destroying her own equipment (no outrage there, as it for other players who did the exact, same thing) deserved the unstoppable fighting form of Muguruza. The superior player came to win, and she did.

As for Barty, the remarkable Sofia Kenin outplayed her in every conceivable way, all leading to a great outcome for the Australian Open final no matter who wins, though I support Muguruza.

spystud said:
Sofia/Garbine, this board will not be happy.
Click to expand...

Since the start of week two, one of the players I most wanted to see reach the final did so, and that's great. So many around her repeatedly tried to write of Muguruza-a majors winner--yet start entire threads on players with none (as if they are some giant in the making), or struggling to find some of their old form.

The best of those semifinals reached the finals. No "choking" involved (which is an insult to the games of the winners). Those bitter bosrd members can deny it until the end of time, but the facts were in those matches for all to see.

Glad im not the only one who thought Garbine's post-match interview was weird as. Definitely sounded like she didn't want a bar of it and wanted to just bail lol.

Only one American girl made the junior QFs. And, interesting to my mind, all 8 are of a different nationality as they were in the womens draw.
Last edited: Jan 30, 2020

Just woke up and discovered that Muguruza has made it to the finals!!!! Kenin vs Muguruza for the championship! Hooray!

Got a feeling its a Thiem time.

spystud said:
That was an incredibly muted celebration.
Click to expand...

yep have been all tourney 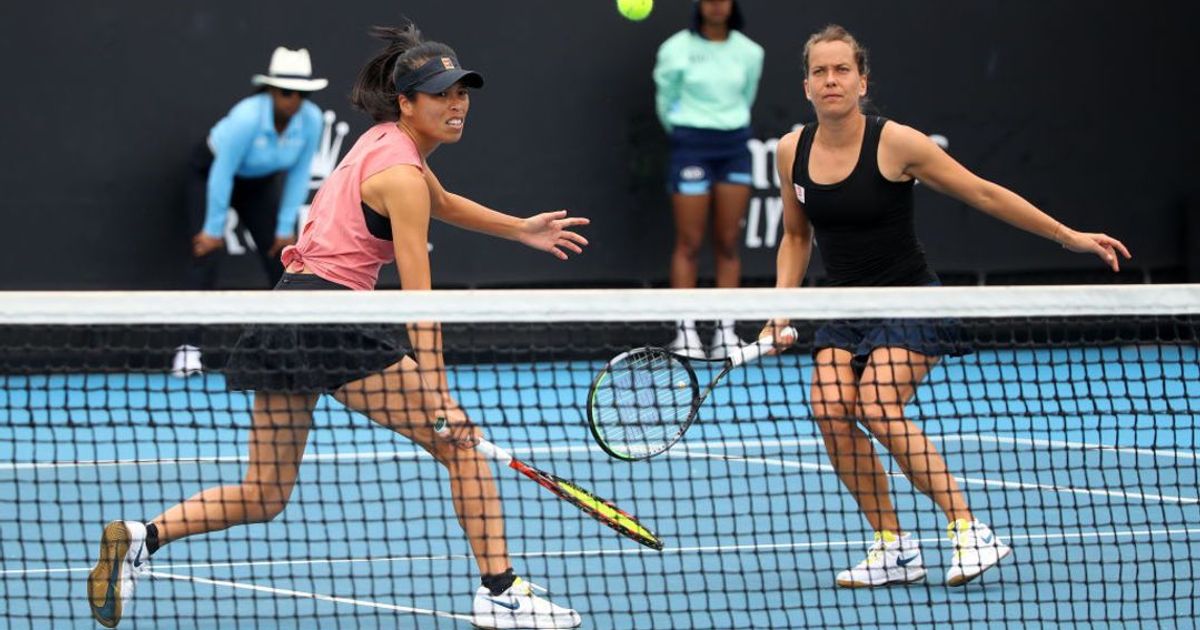 The top of the WTA doubles rankings is set for a shake up after the Australian Open, with Hsieh Su-Wei set to overtake partner Barbora Strycova.

spystud said:
That was an incredibly muted celebration.
Click to expand...

I'd say that's a good sign as she's not just happy to be returning to form and reaching a slam final, her target is the slam title and with Kenin a first time finalist waiting for her in the final I'd guess she is quietly confident with a healthy measure of caution hence her muted response when winning. OTOH could have been the heat considering what Halep said in the post match interview.

forehandblast said:
Bigtime. She was even lucky to survive Gauff. And so lucky today. Barty playing literally some of her worst ever tennis and still had many points and chances to win both sets, and a big lead in the 2nd.
Click to expand...

I Am Finnish said:
Muguruza in the final out of nowhere who had predicted her before the tournament?
Click to expand...

She was my favorite for so many slams even after her form dipped (I kept thinking she’d burst out of nowhere to take her third slam). But then I finally gave up on her and now she.....does this.

Lose your first set of the tournament 6-0 versus a qualifier, reach the final.

Has this ever happened in a Slam before?

Pam Shriver said during the match yesterday that Conchita Martinez had told her that Muguruza was feeling "great" at this point in the tournament. But, overall, coming into the AO, they weren't really expecting this sort of run.

Could be an interesting final ("could", not "will"). Muguruza has the game to blow through Kenin. But, with Garbine's not-so-great movement and general streakiness, Kenin could be problematic if she gets a lot of balls back, throws in those drop shots (which she should definitely do), mixes it up. Kenin's not as rhythmic as Halep, which, if she's playing well, could bother Muguruza.

Muguruza, a 2 time Slam champion vs Kenin in her maiden Slam final.

Will this be a case of experience triumphing over novelty?

Hoping for a tie!
I

Halep didn't play bad. Mugu Played really well. Best I have seen her play in years. She was dialed to 11.

Kenin beat Muguruza 6-0 2-6 6-2 at the China Open in September; however, this is a renewed Garbine, more like her 2016/2017 self. Perhaps the muted display by Mugu is because she knows Kenin is no pushover and there's still work to be done, and with 2 slams under her belt already, adding to that is her main priority.
Personally really hoping Muguruza shows up and plays her best, freely as she's a 2 time slam champ and now a play who has made F in 3 of the 4 individual slams - as far as slam results go she's already had an incredible career even with all the poor spells she's been through.
I was thinking, Mugu has a useless H2H record vs Pliskova, but compare her slam results to Pliskova and it's really quite amazing especially given how consistent Pliskova can be on the WTA tour.

If Garbine doesn’t have more winners, something has gone terribly wrong.
I

The BBC highlights show was cr&p. It's 60 minutes long and spent 45 mins showing a routine 3 set win for Djokovic over Federer. The more exciting matches were the two womens SF. Off to youtube it is then for a search.
R

NaomiKonjuhPotapova said:
Lol hardcore Halep fans in this board.

I just want a good final. Hope Kenin is strong mentally unlike Ms. Von at FO last year. That was a dud.
Click to expand...

Will this be a case of experience triumphing over novelty?
Click to expand...

I wouldn't call Kenin a novelty. I've always rated her as a very solid player but have been so impressed by her resilience and mental toughness through this tournament. Win or lose i'm a fan and expect plenty more good results from her in the future.

Rocket54 said:
I wouldn't call Kenin a novelty. I've always rated her as a very solid player but have been so impressed by her resilience and mental toughness through this tournament. Win or lose i'm a fan and expect plenty more good results from her in the future.
Click to expand...

I meant she is a novelty at a Grand Slam final. Hope she isn't overcome by nerves and is able to play her best.

Don't think that I'd characterize either Simona's or Sofia's SF performances as particularly defensive. Ash and Garbine are certainly bigger servers and somewhat bigger hitters than the other two. Ash hit 8 aces (with 1 DF) while Garbi hit 10 aces (with 2 DFs). Both Simona and Sofia hit 2 aces with only 1 DF.

Simona played an aggressive counterpuncher style in her match. But not exactly what I'd call overly defensive. Even tho she didnt hit quite as big as Garbine, she seemed to be the aggressor nearly as much as her opponent. Sure, Garbine played a higher risk game and Simona's game was somewhat cleaner. But not her cleanest by any means. She still had more UEs than winners.

Sofia also played an aggressive, tenacious style. Not her cleanest match, but moreso than Ash. Barty was uncharacteristically nervous and error-prone in her match. I dont think that her game is normally as high risk as that of Mugu (or someone like Ostapenko).

More total pts in the Simona-Garbine match. 177 pts compared to 159 for the other SF. And a Higher level match overall. (Watch that one if you are only gonna watch 1 SF).But, in both cases, the delta between the winner and the loser was a mere 3 pts. Both fairly close matches even tho they only went 2 sets.

Not sure that we can really draw any hard & fast conclusions between offensive and defensive styles given that both matches could have easily gone the other way if not for a handful of crucial points.
Last edited: Jan 31, 2020

Crucial stat, that really made the difference (e.g. according to Mats and Justine)
Halep - Muguruza

Strycova's attitude is so bad. She was so p**sed off after the defeat. Maybe she just should play better.

Marius_Hancu said:
Crucial stat, that really made the difference (e.g. according to Mats and Justine)
Halep - Muguruza

That isn't new. Halep is planted on the baseline and is encouraged by Darren.

NaomiKonjuhPotapova said:
That isn't new. Halep is planted on the baseline and is encouraged by Darren.
Click to expand...

That's Cahill's narrow-minded focus, hence the reason Halep avoids the net to the degree that her speed is never used to its full advantage (and obvious benefits of knowing how to dismantle opponent's games at the net). Its no wonder the more skilled Muguruza won that match.
C

CosmosMpower said:
Kenin is going to win to keep the musical chairs of womens one hit wonder grand slam winners going yet another round
Click to expand...

Is it bad? It just shows how good women's tennis is. The level is so high now that basically everyone can win a Slam.
F

CosmosMpower said:
Kenin is going to win to keep the musical chairs of womens one hit wonder grand slam winners going yet another round
Click to expand...