For your reading pleasure... 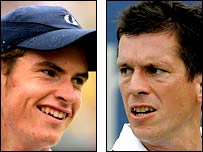 Andy Murray might be Tim Henman's successor as the darling of British tennis, but his first shot in the Davis Cup highlighted their wildly different characters.
Or rather, it was his reaction to the shot that was so revealing.
After cracking a backhand return down the line for a winner, the Scottish teenager raced up to the net and shook his fist in the face of a bemused Israeli opponent.
It was impossible to imagine such a reaction from the reserved Henman.
The duo meet for the first time in Basel on Wednesday and it will be a meeting of opposites in many ways:
PERSONALITIES

Henman has frequently been criticised for failing to show enough emotion and passion on court.

If I don't get annoyed on court I don't play well

His clenched-fist celebration often looks like a contrived response to this criticism rather than a show of natural aggression.
Yet it is difficult to deny that behind this cool exterior lurks a fierce competitor. How else could he have stayed in the world's top 10 for so long before his problems with injury and form this year?
In contrast, Murray is overtly passionate and aggressive.
He admits: "I am a bit fiery on court, but I'm always going to be like that and I don't want to change.
"If I don't get annoyed on court I don't play well, so I'm not going to stop it just because a few people don't like it."
BACKGROUNDS

Henman's demeanour is arguably a product of his middle-class upbringing in the home counties. His father is a solicitor in Oxford and Henman went to a public school. 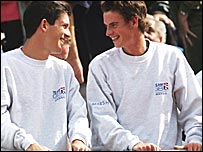 Henman and Murray have been members of the same GB squad

Tennis is very much in his family. His grandmother was the first woman to serve overarm at Wimbledon and he grew up with a tennis court in his back garden.
And Henman's tennis development was overseen and funded by his family and not the LTA.
Murray grew up in Dunblane, Scotland, and in 1996 he survived the massacre at Dunblane school when a gunman shot 16 children dead.
His mother Judy, a former Scottish national tennis coach, has been his tennis mentor.
At the age of 14 he left home and moved to the Casal-Sanchez tennis academy in Barcelona, which he says helped to forge his independence and single-mindedness.
GAMES

Henman is widely regarded as the finest serve-and-volleyer in the men's game and for much of his career his favourite surface has been grass.

Have your say on Five Live

But in recent years he has suggested he is better suited to fast hard courts or indoor carpet, as he says they are now quicker than Wimbledon's grass.
While his volleys are instinctive, Henman's groundstrokes - and particularly his forehand - can be erratic and his serve lacks the pace of some of the top players.
In contrast, Murray's game is built on the solid groundstrokes he honed on the clay courts of Barcelona.
His returns are already a major weapon and his serve has improved massively this year as he has bulked up.
He has also improved his general fitness after it was criticised during the grasscourt season.
And although he isn't yet in Henman's class as a volleyer, Murray is increasing the frequency of his forays into the net with notable success.
FORM

Murray is the highest climber in the ATP rankings this year. The Scot was ranked outside the world's top 400 before Wimbledon, but is now 70 in the world.

Henman to take on Murray in Basel

He has built on his success at Queen's and Wimbledon by winning two Challenger tournaments and then reaching the final of the Thailand Open, where he impressed in defeat by world number one Roger Federer.
Yet while Murray is very much in the ascendancy, Henman has been in decline this year.
He finished 2004 ranked sixth in the world after reaching the semi-finals at the French and US Opens, but this year has been a struggle.
He has been hampered by back and shoulder injuries and has failed to get beyond the quarter-finals of any tournament. As a result, his ranking has slipped to 28 in the world and he has even admitted he could retire next year if results do not start going his way.

I hope these two will have a nice respectful close match. Henman using his experience while Andy relying on his youthfulness and more modern game. Andy will win and the torch has been passed on to the next player representing GB.

Another interesting article, from the Telegraph

which talks about the fact that they've actually become quite close friends, practise together, and that Murray is 'fiercely defensive' of Henman's record.

Do you remember that Henman and Sampras were good friends, and used to play golf together and practise together, and some commentators said that was why Henman could never beat Sampras? (yes, I know he did beat him eventually, but as far as I remember it was then too late to count).

I personally don't think Murray will be affected in the same way.... and anyway, it may have been that Sampras was simply too good for Henman in his prime. Although lesser players than Henman beat him sometimes, come to think of it.
K

Kevin Patrick said:
"it may have been that Sampras was simply too good for Henman in his prime"