Bianca Andreescu: under the radar but not for long!

Toyo said:
I don't think so, I was looking for it and couldn't find it. Perhaps someone else could share?
Click to expand...

It's bizarre someone would not pick it up as Bianca is one of the biggest sports draws in Canada right now.

Beacon Hill said:
It's bizarre someone would not pick it up as Bianca is one of the biggest sports draws in Canada right now.
Click to expand...

TSN and Sportsnet failed to get the rights to WTA events, sans majors and Rogers. It's on DAZN, an internet service that costs 25 bucks a month. Does anyone have a free live-stream?

In Canada you can sign up to DAZN and the first month is free but you have to cancel before one month is up. I just signed up
O

French network TVA Sports shows later stages of WTA tournaments. It has started at semifinals at times, but I think they changed the programming this week because I saw Bianca's match last night. This morning is going to be live. Originally, they were going to start the broadcast at rhe quarterfinals this week.
S

I Am Finnish said:
You cant win it all
She is only human she will be fine

A bad bad choke from her. Unacceptable.

SeeingDusk said:
A bad bad choke from her. Unacceptable.
Click to expand...

Using sportstream.tv, a much cleaner version of joker.

Osaka controlled herself and her balls better in the last 2 sets.
Great advice from father-coach to make sure she puts more balls in play. She executed.
S

I Am Finnish said:
Only human choke
Click to expand...

SeeingDusk said:
She was up a set and break. Thought it was over when I looked away for 20 mins. Come back to her losing 4 games in a row. Then up 3-1, serving for 4-1 in third set. Score was 30-30. Knew she was gonna get broken and she did get broken. Got score to 4-4, and broken for 4-5. Then missed easy return to break back. All her mistakes cost me 8k.
Click to expand...

Wow, you knew she was going to get broken. You should have taken all your net worth, and also borrowed as much money as you could get your hands on and bet she would get broken.

TenS_Ace said:
From PULP FICTION ...
English, motherXXXX'r ! Do you speak it?!
Click to expand...

It's interesting that she called her coach when she was up a break and asked her coach what she was doing right. It's as if she knew/felt something was about to turn around not going her way.
S

Beacon Hill said:
Wow, you knew she was going to get broken. You should have taken all your net worth, and also borrowed as much money as you could get your hands on and bet she would get broken.
Click to expand...

Nah, it would only happen if it goes against me.

The most important stat on TV during the match:
in rallies over 9 shots, Osaka was winning 80%
Once they learned about it, she started to lengthen rallies whenever feasible.

Marius_Hancu said:
The most important stat on TV during the match:
in rallies over 9 shots, Osaka was winning 80%
Once they learned about it, she started to lengthen rallies whenever feasible.

Interesting stat, but it's a bit like saying what if players learn that it's important to return Isner's serve in order to break him. If Bianca is playing well, good luck extending many rallies past 9 shots.

Marius_Hancu said:
The most important stat on TV during the match:
in rallies over 9 shots, Osaka was winning 80%
Once they learned about it, she started to lengthen rallies whenever feasible.

She had a knee problem in the semifinals if memory serves me well and I wouldn't expect her to do well in longer rallies in that case. That also probably means that she had to try to shorten the points, not necesarelly an ideal strategy. 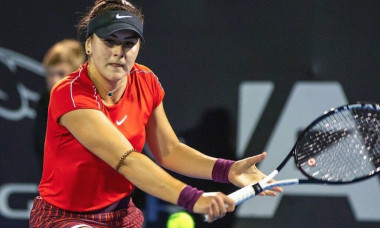 To say that Bianca Andreescu’s win on Saturday in the first round of the qualifying event of Rogers Cup went unnoticed would be an understatement.

Not a single journalist asked to interview the Canadian and only a handful of fans were in the stands on National Bank Court to see her play.

But the victory is no small feat. The 16-year-old, who entered the qualifiers with a wildcard from Rogers Cup organizers, defeated Samantha Crawford of the US, 16th seed and world no. 101 (542 rankings ahead of Andreescu), in two sets of 7-6 (3) and 7-5.

Born in Mississauga, Bianca Andreescu started playing tennis in Romania—her parents’ home country—before returning to Canada to join Tennis Canada’s National Training Centre in Toronto. Today, she is ranked world no. 8 on the International Tennis Federation (ITF) Junior Circuit. She rose as high as no.3 on February 1.

But the fact that her successes have not garnered as much attention as those by Eugenie Bouchard, Françoise Abanda or Charlotte Robillard-Millette doesn’t seem to bother her. She reasons that the depth of the emerging talent in Canadian women’s tennis explains why, and that’s just fine with her.

“When I walk onto the court, I only think about playing and nothing else,” she affirmed. “I try to have fun and do my best and it works. I win matches and gain more and more confidence thanks to all the support I get from Tennis Canada.”

In fact, Tennis Canada named Andreescu 2015 Junior Player of the Year after she ended the season by taking the crown at the Orange Bowl in Florida—a season she had started as world no.332 on the Junior Circuit.

“She is solid, even when it gets tough,” he said in an interview in January from Melbourne. “I saw her last summer at her first Challenger in Gatineau. She made it to the final by beating players who were ranked much higher and who had much more experience. I see the respect she has for others and she has even more respect for herself. And that’s perfect!”

On Thursday, at the event to launch Mini Rogers Cup on the Esplanade du Parc olympique, Andreescu got to meet her idol: world no.5 Simona Halep of Romania. They had both been invited to hit with the young participants.

“It was incredible! I’m so happy to have had the chance to meet her,” said Andreescu. “Simona is so nice. I hope I get to hit with her again this week!”

The Canadian took her hero by surprise when she started speaking to her in Romanian. “She was happy to know that my career was going well since I’m also from Romania. […] I asked her a few questions and she gave me good advice. I asked how the junior and professional tours are different. She was very generous and humble,” she added.

If all goes according to plan, in a few years, Andreescu could be the one giving advice to the next rising stars.
Click to expand...

You called it. Good job.

I feel this girl is like Eugene Buchard/ Ana Kournikova/ etc.. more interested in fashion rather tennis. Of course, she is having fun and enjoying for now and may be 2020 is her year and thats it. After that some one from celebrity will take on ride for lollipops.


Bianca's dress resonates the best, perhaps, with the place.
Click to expand...

Right 4 look so much better than the left 4. Petra and Elina looking particularly horrible.

donquijote said:
Right 4 look so much better than the left 4. Petra and Elina looking particularly horrible.
Click to expand...

Yes, but Naomi is exquisitely elegant and reserved/classy, in a modern Japanese style. Halep holds off Andreescu in Shenzhen thriller: 'It was a challenge...a good fight'

Marius_Hancu said:
Halep holds off Andreescu in Shenzhen thriller: 'It was a challenge...a good fight'
Click to expand...

And all 15 people in the crowd went wild.

It was grueling match. You can easily notice that Bianca's power really went down during the 3rd set.
It's almost like Stephens vs Halep at RG, Halep just wore Bianca's down (She mention she had back problem).

Andreescu falls to Halep in WTA Finals opener
---
After the match, Andreescu said "my back friggin' hurts." Asked if the injury could cause her to drop out of future matches, she said "we'll see."
---

https://twitter.com/i/web/status/1189059538193932288
The two Canadian WTA Future Stars players whom Bianca met, Annabelle Xu of Montreal, and Kayla Cross of Toronto, are respectively 2nd from left and 2nd from right in this pic: 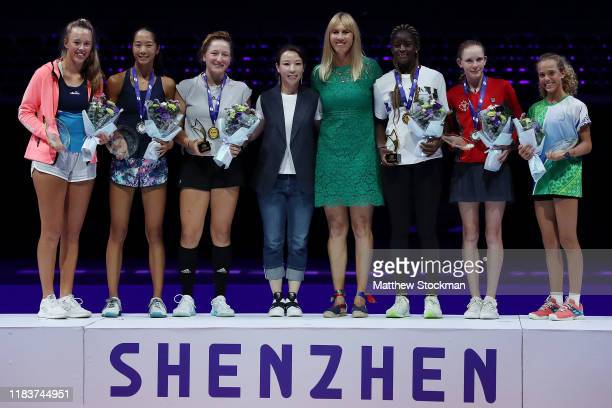 I am always intrigued how players close out a match because so many falter at match point. Whether the opponent digs deep to fend it off, or the player at match point changes up their play resulting in loss of point. We've all seen it so many times, and many years ago in a local tournament, facing the #1 seed in the quarters, I faltered at match point and it still lives with me.
A

https://twitter.com/i/web/status/1189059538193932288
The two Canadian WTA Future Stars players whom Bianca met, Annabelle Xu of Montreal, and Kayla Cross of Toronto, are respectively 2nd from left and 2nd from right in this pic:

SHENZHEN, CHINA - OCTOBER 27: (L-R) U16 WTA Future Stars Rosie Sterk of Great Britain, Annabelle Xu of Canada and Reese Brantmeier of the United States, WTA Legends Zheng Jie and Alicia Molik and U16 WTA Future Stars Clervie Ngounoue of the United States, Kayla Cross of Canada and Valani Dusserre Valleaux of Pacific Oceania pose for a photo during the WTA Future Stars Trophy Presentation Ceremony on Day One of the 2019 WTA Finals at Shenzhen Bay Sports Center on October 27, 2019 in Shenzhen, China. (Photo by Matthew Stockman/Getty Images)
Click to expand...

Girls tennis in Canada looks strong. Seems like a lot of girls in the 14 - 16 age range that are doing well internationally.

God, now it's the knee too

Bianca's commentary after match against Pliskova at 2019 WTA Finals (retirement):

“I had a scan Thursday to check my knee after last night’s match and unfortunately the results show that I need to withdraw,” said Andreescu.

Andreescu later said results from an MRI convinced her to withdraw from the eight-player tournament on Thursday. She didn't provide specifics on what the exam discovered and Bruneau declined to go into further detail when reached in Montreal.
---

After her withdrawal from the WTA Tour Finals because of a knee injury, US Open champion Bianca Andreescu is in Europe consulting some specialists. "She had some tests, and she's currently in Europe to meet specialists and get different opinions. She'll see someone on Monday, and then we'll review it," coach Sylvain Bruneau during a conference call to talk about receiving a major coaching award in Canada. "There isn't unanimous opinion on the next steps. However, what we do know is that it's not anything ultra-serious. But there will be some small decisions to be made. "
---
That was Nov 8.
Last edited: Nov 20, 2019

...and it was unanimous!

Great, 3 more posts to get off this page after all his tweets.