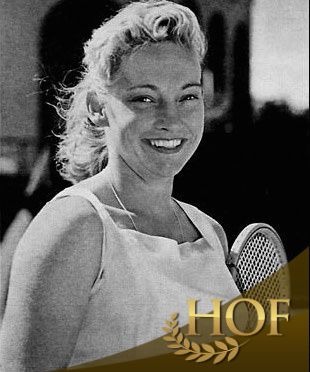 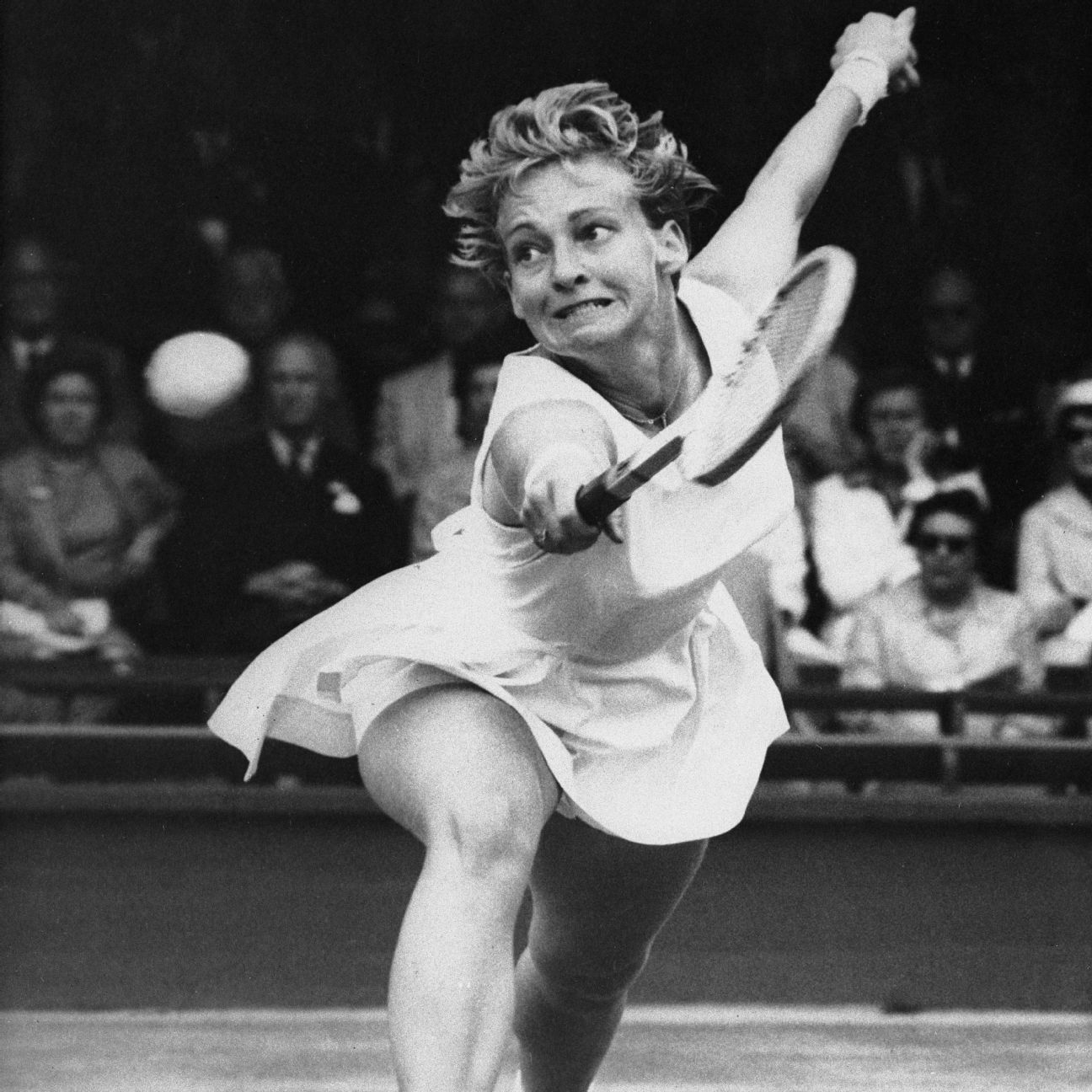 Darlene Hard, who won three major singles titles and 18 major doubles titles in a Hall of Fame tennis career has died. She was 85.

Darlene Hard, an American member of the Tennis Hall of Fame and three grandslam winner in singles, died Thursday at the age of 85. The service-volley-style player celebrated even greater success in doubles, she winning a total of 18 grandslam trophies in the 1950s and 1960s.

Hard played seven finals in singles on the Grand Slam tournaments, succeeding twice in New York and in 1960 in Paris. At Wimbledon, she won 4 women's doubles titles and 3 mixed doubles trophies. She celebrated twice alongside the legendary Australian Rod Laver.

Some nice serve & volleying in this match.

She's in one of my favourite old tennis photos, congratulating her doubles partner Althea Gibson on winning Wimbledon after losing to her in the 1957 final:


She's in one of my favourite old tennis photos, congratulating her doubles partner Althea Gibson on winning Wimbledon after losing to her in the 1957 final:

I wonder how much heat she had to take to even take Gibson as a partner, let alone kiss her on the cheek in 1957. This would NOT have been a popular choice among many Americans and the Americans in Tennis circles were no better than any other demographic. It always took some courage back then to publicly 'associate' or 'co-mingle' the races on an equal footing in the fifties and early 60's. https://en.wikipedia.org/wiki/Darlene_Hard

"Hard won a national hardcourt title with Billie Jean King, and also the deciding match of a Federation Cup over Australia with King as her partner. King, perhaps the biggest name in the sport in the last 50 years — whose name is on the largest tennis facility in the world at the U.S. Open — spoke Friday with fondness, even awe about Hard.

“She was amazing, one of my heroes,” said King, who is eight years younger than Hard. “She was a great doubles player, had quick hands, and was a great athlete. I was 13 years old when she asked me to play the national hardcourts with her. We won, but I was so afraid I was going to let her down.”

In 1959, Rod Laver, who is 83 now, got to the finals of the Wimbledon men’s singles, doubles and mixed doubles. That year, he won only the mixed doubles. His partner was Hard. Laver, whose tennis legacy matches King’s and who is the only male player to win all four major tournaments in the same year — he did that twice — spoke Friday of Hard as if she were the star of their pairing.

“I’d go out onto the court with her and I’d tell the other team that I wouldn’t have to hit any overheads. Darlene would hit them all,” he said. “They’d start hitting hard shots at her at the net and she would get them all back. Pretty soon, the word was out. You better hit the ball at Laver.”
https://www.msn.com/en-us/sports/te...n-usc-publications/ar-AARtjL9?ocid=uxbndlbing

They played the Wimbledon mixed doubles again the next year and won again.

The rest of the article in the LA Times is great:

Hard had retired five years earlier and begun teaching tennis at facilities she owned in the San Fernando Valley. She promised one of her students that, if she made it through a qualifier event, she would play doubles with her at the U.S. Open. This was 1969, the second year of tennis’ Open Era, when players could actually be paid for winning. To that point, all of Hard’s tennis successes had brought her a total financial payout of $200.20. That was seven years of expense money — $28.60 a year — given out at Wimbledon. But in 1969, she wasn’t allowed to play with her student, an amateur player, because Hard was a pro. A teaching pro.

“I never thought about that,” she said, when telling the story years later.

Left to hang around with no partner, she ran into an acquaintance from her years of hitting with the guys at the L.A. Tennis Center. The acquaintance put her together with another player whose partner had jilted her.

Durr, a veteran from France with a high international ranking, played soft angles and served little lollipops that she courageously followed into the net. Hard served bullets, charged the net and popped hard-angled volleys. They were tennis’s odd couple. They also made it to the final.

Their opponents were Margaret Court and Virginia Wade, both veterans and big-time winners. Soon, Hard and Durr trailed, 0-6, 0-2. Hard told Durr that they better get at least one game on the scoreboard to avoid total embarrassment. They won 12 of the next 17 games and the title. Hard got $1,000, bringing her grand total of career tennis winnings to $1,200.20.

Hard returned full time to Los Angeles, to her tennis teaching job, and disappeared from a sport that was just beginning to gain national and international popularity and attention. And she couldn’t have been happier about that. As outgoing and colorful as she was on the court, Hard was private off it. She became even more so over the years. The self-promoting athlete disgusted her, and she said so when asked.

The thing is, she was seldom asked. Nobody knew where she was.

One of her tennis students was Mona Cravens, who was then, and still is, head of student publications at USC. One day, at her lesson, Cravens noticed a 3-by-5-inch card advertising tennis lessons. The card said that the teacher was “a two-time national champion.” In those days before Wikipedia, Cravens had to go to the USC library and look up this Darlene Hard. Sure enough. She had taken dozens of lessons from her and Hard never mentioned anything about being a Grand Slam champion or being No. 2 in the world.

Cravens admired Hard’s work ethic, and soon, when a job opened up in the USC publications department, Cravens offered Hard a job — assuming all along that a tennis champion would not enjoy sitting in an office 40 hours a week. She was certain the answer would be no. She was wrong.

That was 1981. Hard, in part fearing some bouts she had had with skin cancer, took the job. She did everything from designing USC yearbooks to doing internet searches of stories about USC. With a few bouts of illness interrupting the run, she stayed in that position until recently, when she had a fall and went into a coma, from which she never awoke.

Around USC, she was known as “Darlene in publications”; not “Darlene, famous tennis champion.” There may be hundreds of USC faculty and students who will read an obit about her and be stunned that Darlene in publications was actually Darlene Hard, who, for four or five years in the late ‘50s and early 60s, was the best woman’s tennis player in the world.
Her achievement of anonymity would make Darlene happy. Once she put tennis in her rearview mirror, that’s the way she wanted it. 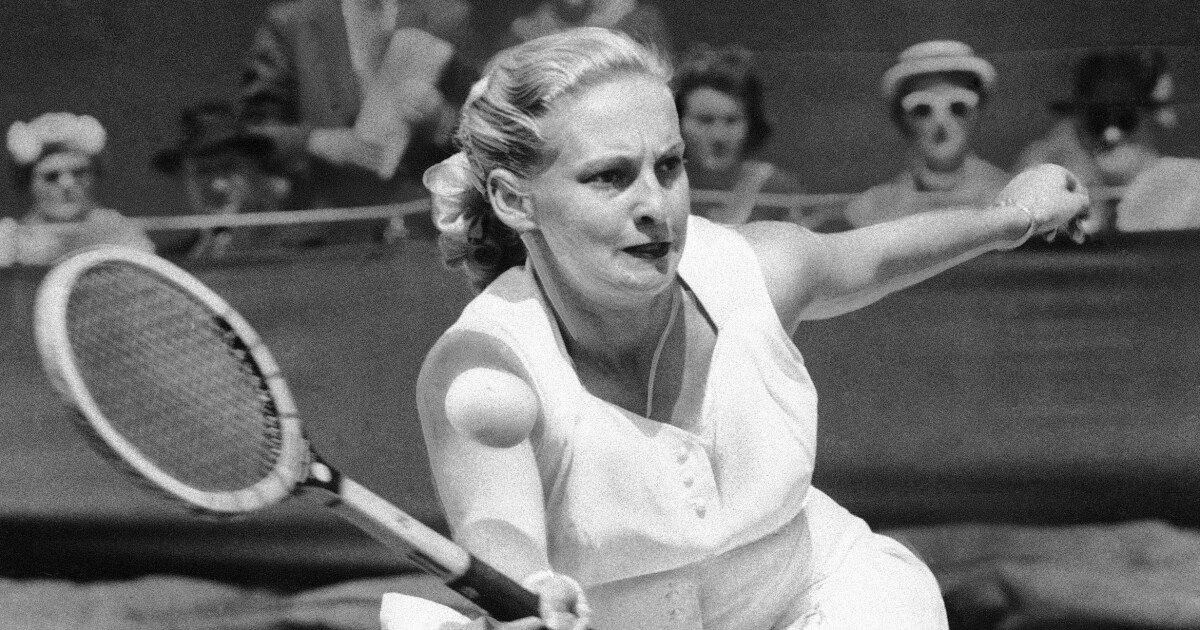 Moose, thank you for this wonderful read... Much, much appreciated...


She's in one of my favourite old tennis photos, congratulating her doubles partner Althea Gibson on winning Wimbledon after losing to her in the 1957 final: