The world's best player Novak Djokovic decided to help Bergamo, the Italian city which was affected the most by the coronavirus pandemic. 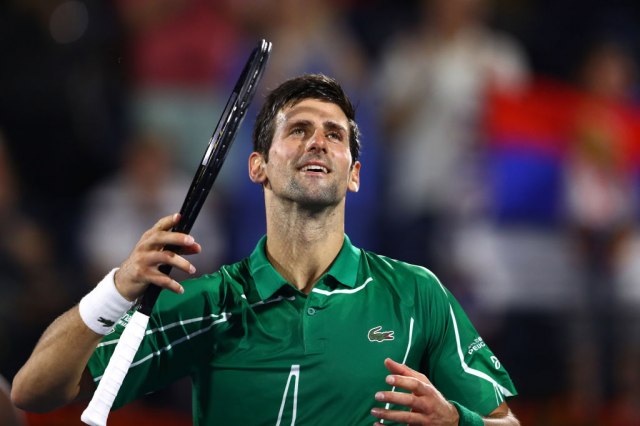 The Serbian donated a currently undisclosed amount to Bergamo. Previously he donated one million Euros to his homeland Serbia.

"Djokovic with the golden heart" - headlines in the Italian press.

"That's right, Djokovic has a golden heart. He never stops being generous. The best people are those who help silently, not exposing themselves, and people don't know what they do. We found about his love for Italy from someone else, not from him. Novak Djokovic impressed me, the best player in the world, who after huge donations to Serbia helped us too. When he heard the news from our province Lombardy, he helped. He is a great man. I hope I will be able to hug him soon", said Peter Assembergs, director of the health center Bergamo, in "Porta a porta" interview.

"Novak's donation will help in modernization of shock rooms in Treviglio hospital, which is currently the most important place in the fight against coronavirus. The hospital will buy masks, protective glasses, respirators, defibrillators, monitors, lamps and other needed equipment, which will additionally ease the work of medicine workers. All thanks to Novak Djokovic's donation", claims Assemberg.
Click to expand...

This is amazing. Thank you Novak.

If you have any ideas, maybe pop him a question, they might pick yours

Tenacity said:
If you have any ideas, maybe pop him a question, they might pick yours

The person who asked which shot they would take from each other had a good one!

I wonder, what's the swing weight and balance of his pan?

Sent from my SM-G965W using Tapatalk
Click to expand...

Commentated by Becker, one year before he would join forces with Novak and up his Wimbledon game...

Doctor/Lawyer Red Devil said:
Commentated by Becker, one year before he would join forces with Novak and up his Wimbledon game...

As good as this match was, Nole made life difficult for himself so many times. Had he finished it off earlier, who knows that years Final could've been a whole different story.

Tennis_Freak99 said:
As good as this match was, Nole made life difficult for himself so many times. Had he finished it off earlier, who knows that years Final could've been a whole different story.
Click to expand...

Good thing Dimitrov was in the mood to do the same one year later, when he wasted 3? or 4? set points in the 4th.

Edit: Watching it again, yes, he obviously had tons of opportunities to close it out in 4. He messed up badly, but was probably low on confidence after RG.

Tennis_Freak99 said:
As good as this match was, Nole made life difficult for himself so many times. Had he finished it off earlier, who knows that years Final could've been a whole different story.
Click to expand...

He didn't look tired in the final. He looked like someone else.

"I personally am not for vaccination and I would not want anyone to force me to get the vaccine so I can travel. If that is the rule and the law then what will it be? I have to decide whether or not to undergo it. I have my own thinking. , and whether it will change at some point I do not know. Hypothetically, to continue the season in July, August or September, though not a great chance, as I understand it, right after the abolition of the strict quarantine, there will be a requirement for a mandatory vaccine, which is not yet available " , said Djokovic . 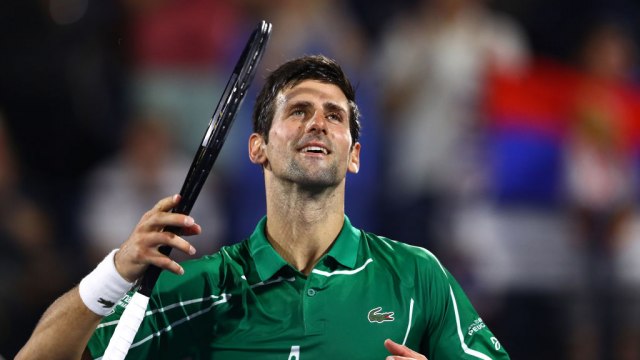 www.b92.net
Sorry for machine translation, I'm too lazy to do it myself.

I hear the screams from Lacoste right now.

Tennis TV know how to make you subscribe to their channel.


Stunning upload from the US Open too.

New pics of Novak from yesterday in Spain: 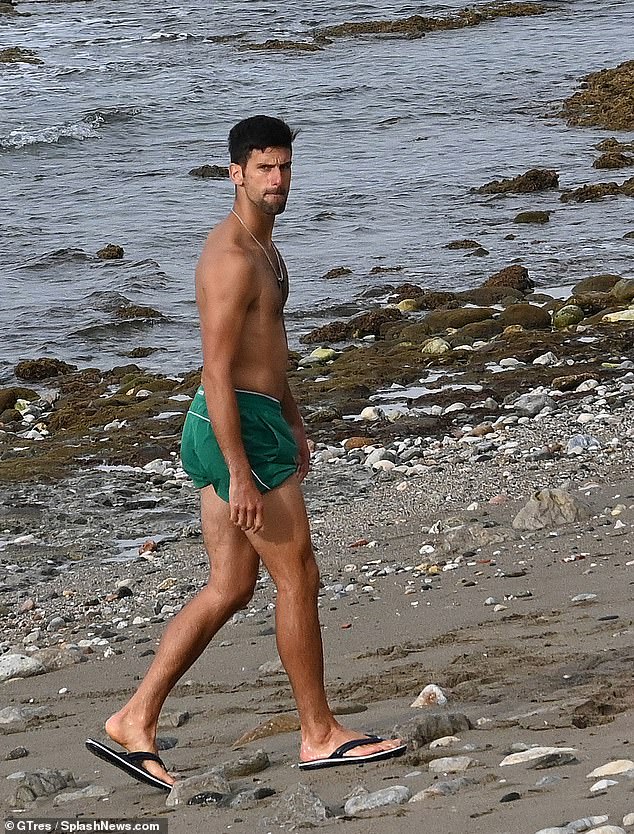 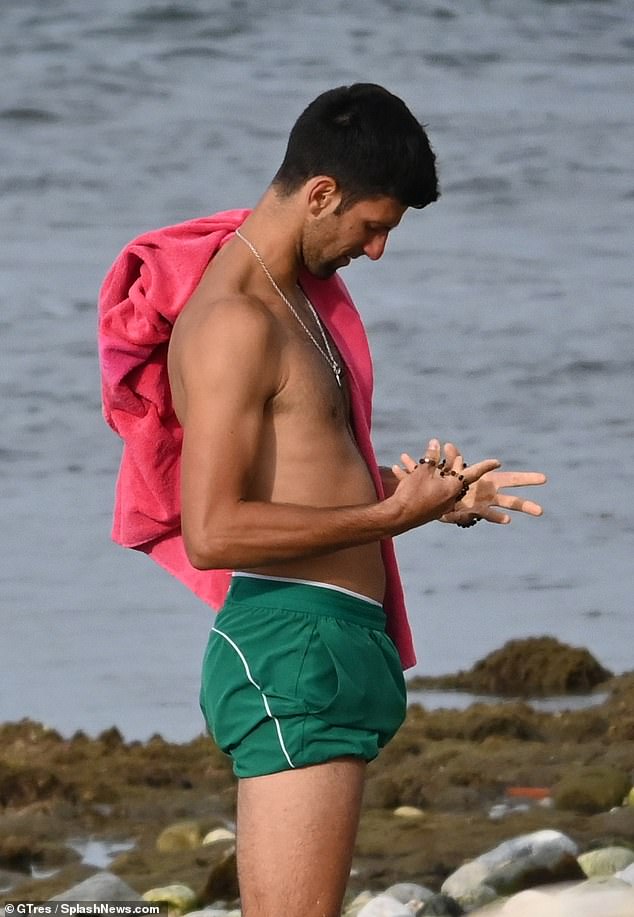 Jelena says Novak considered quitting tennis after a bad loss (to Paire in Miami, after losing to Taro Daniel in IW):

jm1980 said:
Jelena says Novak considered quitting tennis after a bad loss (to Paire in Miami, after losing to Taro Daniel in IW):

jm1980 said:
Jelena says Novak considered quitting tennis after a bad loss (to Paire in Miami, after losing to Taro Daniel in IW):
Click to expand...

Which version of our Serbinator would win?

Happy Birthday to our man. Wishing for him to completely dominate all slams once covid19 is gone.

Just one more win in bunches and 20 will fall!

Happy Birthday Nole. All the best to you!

Damn, 33 years old. Never thought he'd still be playing, but here he is the current world #1. Keep it up and stay safe, both Nole and the rest of you!
C

Djokovic has organized Adria Tour which will be held across several cities from mid June to early July.

So far apart from Djokovic, we know that Thiem, Dimitrov and Troicki will also feature on this regional tour. More names to be revealed later. 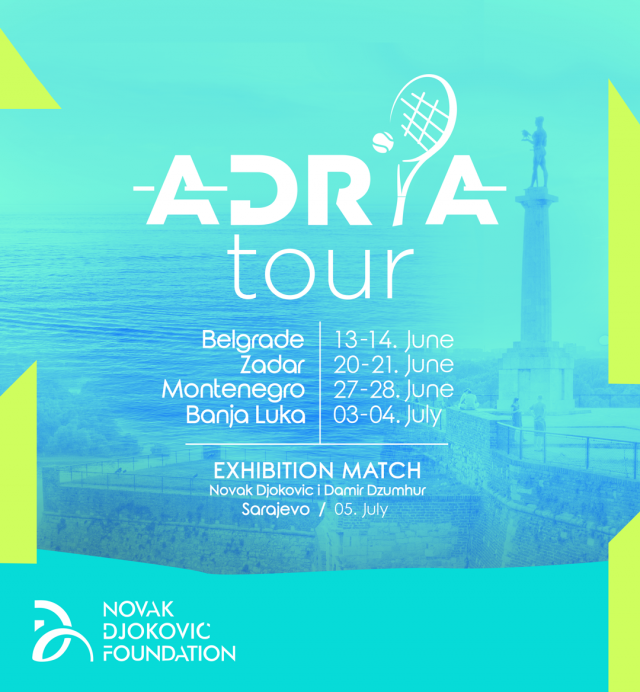 Happy birthday to our Earth's Mightiest. May he continue where he left off before the break.

In honour of Novak Djokovic's 33rd birthday, the ATP Tour is celebrating by reliving 33 facts, moments or memories that have made his tennis career spectacular thus far.

Nole visited the women's volleyball club from Belgrade:
http://instagr.am/p/CAs34bZnrvU/
It was a pleasure to visit you in training, talk about sports and life and play a little volleyball. I believe that Terza's course would be proud to see how skillfully I handled a volleyball.

Djokovic and his brother were the first to greet Thiem and Zverev on their arrivals at the Belgrade airport.

Dimitrov arrived on Monday and already had a training session with Djokovic. Ivanisevic was watching over.

"Adria Tour" will start on Friday, with the official opening ceremony starting at 4 pm local time. After that we will get to watch mixed doubles. Jelena Jankovic, Olga Danilovic, Nenad Zimonjic and Novak Djokovic will participate. Doubles follow after that, where we will get to watch Dimitrov, Zverev, Troicki, Zimonjic among others. The singles draw will be determined by the players, as they will have to serve and hit a certain target where the name of their opponent will be placed. 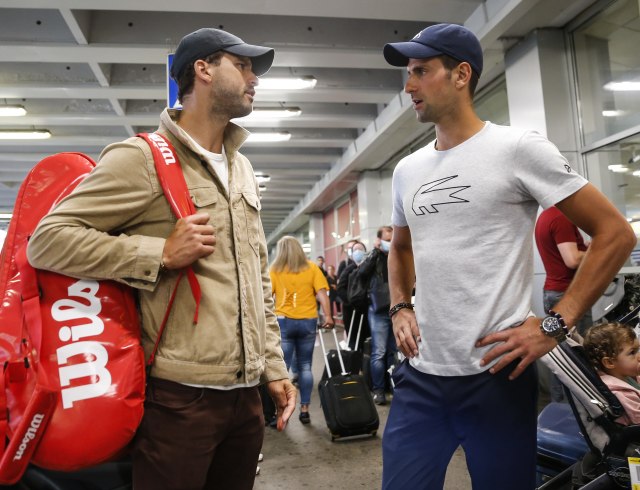 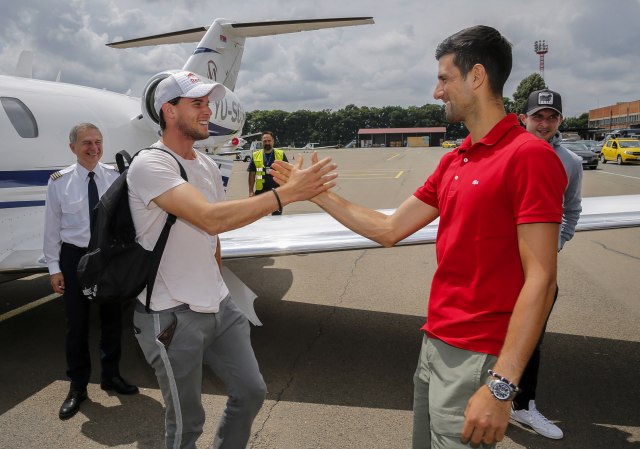 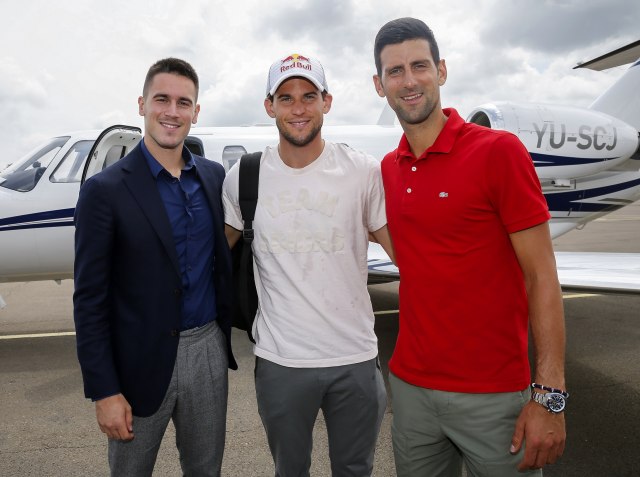 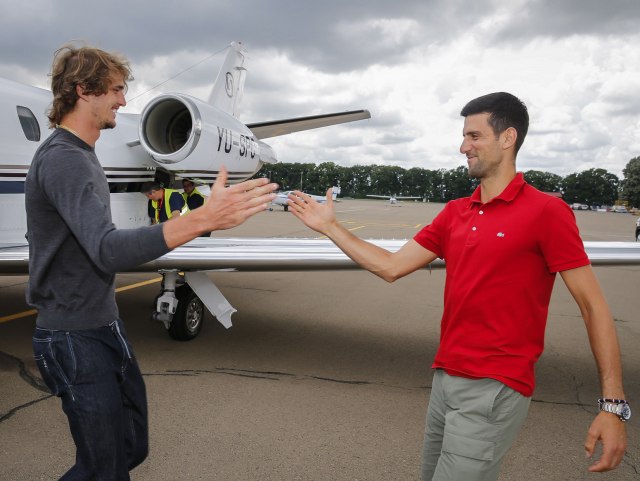 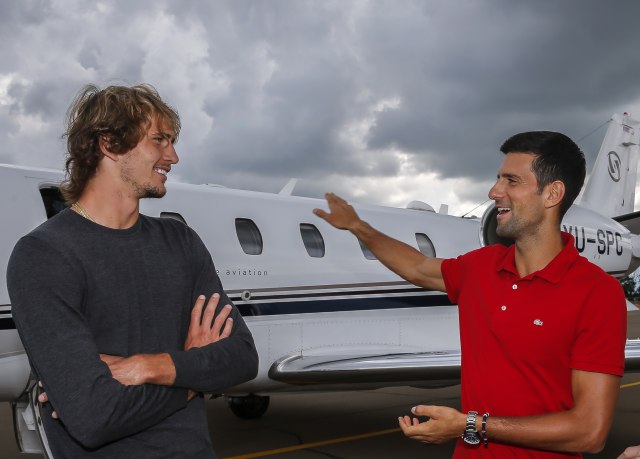 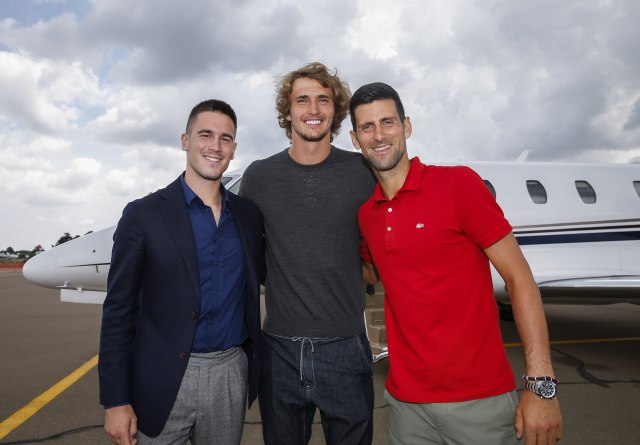 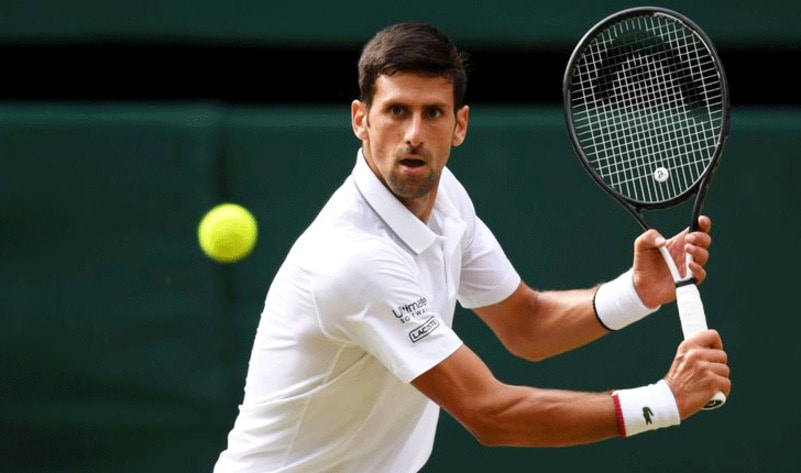 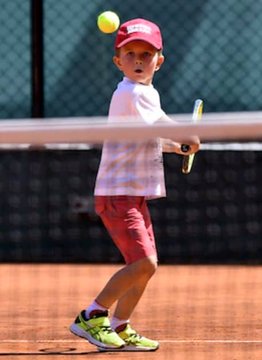 Since USO is happening, i don't see who can realistically overthrow him till AO21.

SecondToNone said:
Since USO is happening, i don't see who can realistically overthrow him till AO21.
Click to expand...

I Am Finnish said:
Is it confirmed?
Click to expand...

The U.S. Open is on for 2020 and a formal announcement is expected soon
Click to expand...

Because they plan to play the USO doesn't mean they will play it. Plenty of people have "plans" in lose 40 pounds over the summer and few achieve their goal.

As if the covid has never existed in Serbia , good they had having fun and I wish I was there

Fun to see Jelena dancing with Novak, they make a great couple!

Congrats to Thiem on winning the tournament. Only player to win every match, well deserved. And big thanks to him, Sascha and Grigor for coming to participate. Belgrade was the center of this sport scene for a weekend, we got to see something we've been missing for months - top tennis with crowds.

Despite beating Troicki and Zverev, Djokovic narrowly missed out on the final on game ratio to Krajinovic, who beat him from a set down.

Seeing his emotional reaction after beating Sascha made me realize for the first time what a tough blow his retirement will be. Not ready for it at all. Hopefully he's still got a lot more to give us on biggest stages until then. He's been so awesome... 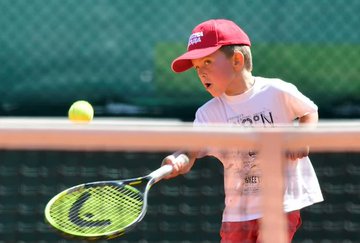 Serbinator recalled loss with to Wawrinka at RG 2015

Guys....what do you think will happen? I hope Novak and the rest of the guys do not test positive but I have a bad feeling...

At worst they will recover soon enough. The question is will these news have any impact on the tournaments that were scheduled for the remainder of 2020.

He'll be fine. I don't think they caught it. I'm an optimist.

I just want to lighten the mood Djokovic clan and this happened yesterday, and I thought it was pretty cool...