matchmaker said:
If he does not win a slam next year, his self-esteem will take a serious blow.
Click to expand...

I don't know about that. It took Sampras three years to get his second GS.
T

I am going with Murray. Murray is much more talented than djokowhimp

oneguy21 said:
Murray might win the Aussie Open and/or the US Open next year; he doesn't really have a tangible chance at winning Wimbledon since Federer will probably win it and Roland Garros will most likely be owned by Nadal for awhile. In anycase, Murray has decent shot at Slams in 2009.

As for Djokovic, he's not going to win another Slam in his life.
Click to expand...

other than AO08 Djokovic hasn't done anything that would suggest he'll win 7-8 slams. outside experience, I think he's right there with Murray, Tsonga and the likes.
Click to expand...

welcome2petrkordaland said:
murray. he's got more variety, just as quick, better slice, better vollies, content to push at times and be patient when the situation warrants, unlike the hot and cold djokovic. due to murray's variety, he can beat you in many different ways depending on opponent's game, unlike djokovic, who is supersolid but much less multifaceted.

not sure why people are saying djokovic will be/is better on grass than murray. murray's slice, volleys, guile, quickness, serve, etc. translate perfectly to grass, whereas djokovic's volleys and slice are a tad suspect.

and as far as clay potential, i see murray having a more suitable game than djokovic, since he is patient, can push the ball, and has recently dedicated himself to becoming superfit, fitness being something djokovic needs to improve his "breathing problem" notwithstanding. also heard murray can bench 300, which ,if true, evidences his dedication to conditioning.

another thing is that i don't think people realize murray's change in court temperment/demeanor. sure he used to mope and whine, but towards the middle and end of '08, he seriously started limiting his negative emotions and exagerating his positive ones. he's even slightly confrontational on the court now, something that i think will help him keep focus. 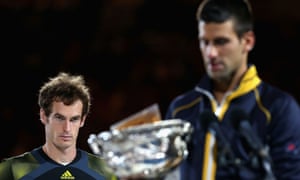 baseline08thrasher said:
Definitely Djokovic.
Djokovic seems to have the mentality of a champion and will continue to dominate through.

Djokovic has superb mental toughness, and hardly ever breaks down.

Murray can still get mad at himself, and break down.

Djokovic doesn't let this affect his tennis.
Click to expand...

egn said:
Who do you think will have the better slam carrer, Djokovic or Murray? Reasoning? How many they win? Which slams?

I am going to have to give the edge to Djokovic, once he grows up I say he wins about 7 or 8. I pencil Murray in around the same, but I think Djokovic can be the first man since Agassi to do a career slam. (Yes Nadal fans i do not think Nadal will do it.) Djokovic has all ready made it to the semis on all of the slams, made it to the finals on the two hard court ones and with a better draw at the French next year I think he can make it to a final there. He can win on clay and can win on grass. I still say hard courts come away his best but I can see him winning something like 3/4 Austraila 1/2 French 1 Wimbledon 2 US Open. Those seem like nice predictions for him.

Murray on the other hand I see thriving in the later part of the year gathering up a bunch of Wimbledon and US Open titles and maybe one Australian Open. Murray does not like clay and seems to do better on the faster surfaces and even said he favors the US Open. I am thinking Murray as a 1 Australia 2/3 Wimbledon 3/4 US Open.

Murray for sure. Jokeovic can't even play 2 sets without tossing a racquet, turning his ankle trying to slide 3 metres on a hard court, and retiring from bird flu, anthrax, and SARS. Overrated. Got lucky at AO08, will never win another.
Last edited: Jul 26, 2021

lol that was in 08… Murray ended up being the clear beta in this matchup w/ insurmountable injuries while Novak went Glut. free/ vegetarian, got superfit, improved serve, vollies, consistency, etc. Novak basically trashed Murray lol. The rest is …. history.