Does anyone know if the Head Speed Pro G360+ and the previous gen G360 use the same stinging instructions? The tie off points are printed in different spots on the frame and I found different instructions online but the pattern and grommet holes seem to line up on both.

I strung the older G360 one according to the klippermate instructions and it had a big nasty bundle of string that didn't sit very flush protruding out from the frame. The G360+ was nice and neat. Wondering if I can string both with the G360+ pattern in the future. 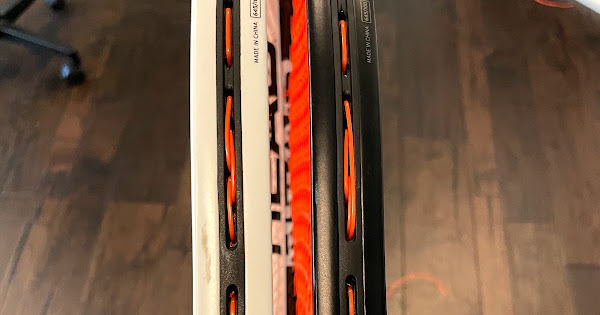 Looks like the grommets are the same so they should be able to both be strung with the g360+ instructions.

CosmosMpower said:
Looks like the grommets are the same so they should be able to both be strung with the g360+ instructions.

Right.
That's what I was going to mention, but you've already discovered this on your own.

By chance (while there were no strings in that 360 frame) did you happen to physically look through those same grommet holes (9T, 9H, 10T) to see if they happen to be larger (regardless of what the printing on the inside of the hoop might say)?
That's what I would do - to verify if, indeed, the same holes are larger, or not.

If that's indeed the case, then (obviously) just tie off the 360 frames the same as you do the 360+ frames.

Oh - if you ultimately determine that the larger tie off grommets, for that 360 frame, are indeed located at 7T, 6H, 12T, contact me.
If the tie-off location, for the mains, truly needs to be at 7T, I can share a couple of things with you (to prevent you from having to deal with the double blocked grommet [at 8T] that occurs if/when tying off the mains down at 7T).

Because you have a double blocked grommet at the bottom, depending on the string(s,) I would consider an ATW. if you use a 2 piece pattern tying off on 12T make sure you cross at 12T is on top of the outer main.

I didn't have a chance to look at the grommets/frame before I strung both. I did the G360+ first and it went off without a hitch so I didn't even think about it until I started on the older G360 and realized the stringing instructions and tie off points printed on the frame were in different locations. Then I realized I had to deal with a double blocked string. I got it through ok but it leaves an ugly bundle of overlapping strings that sticks out.

The frames belong to a team mate so if I string them again next time I'll take a look. I suspect that the frames are identical as far as the hole size if they share the same grommet sets. If the holes in the hoop weren't larger in those areas I don't think they could use the same grommets. I'm guessing head realized the older stringing instructions are a pain and updated them on the G360+. The tension came off the machine the same on both frames so I don't think it affects performance it's just ugly and a bit messy.
You must log in or register to reply here.
Share:
Facebook Twitter Reddit Pinterest Tumblr WhatsApp Email Link
Top