I stake my rubles on Rublev: the official Andrey match watch

Anderson next will be a good test of patience.

Rublev will be the heavy favorite and is the kind of player which is especially hard for a guy like Anderson. Serving strong enough to leaving in this matchup little chances to brake but returning so well that there should be plenty of pressure.

Rovesciarete said:
Rublev will be the heavy favorite and is the kind of player which is especially hard for a guy like Anderson. Serving strong enough to leaving in this matchup little chances to brake but returning so well that there should be plenty of pressure.

KAndyman is playing well. Medfly found out the hard way today, generating just one BP in 11 Anderson service games. Had he converted on any of 4 BPs of his own early in the second set, KA would have won in about an hour.

Beware the LL Sonego, Andrey! You were one just three years ago at Umag’17.

Anderson pushed him actually a bit somewhat more then I thought. Right now Rublev is in great form and is forehand seems to have become even deadlier. According to Tennisabstract his forehand potency is the all-time highest. For my part I have to dig deeper to understand the implications of that stat. What I can see is a very potent and precise forehand which puts huge pressure down the court...

Once again you can see the serve effect if you go through the stats with his serve games getting shorter and more successful. And this without gaining too much muscle and slowing his movement down.

Really appreciate Andrey more then a year ago. Interesting comment from Rublev during the trophy presentation that his grandmother was from Austria.

Was that interview after this:

Subway Tennis said:
Was that interview after this:

Oh, was that interview quite a while after? I wonder if Rublev had been hitting with Fed during the off season, and that may have prompted Fed tipping him?

falstaff78 said:
Getting the year started with a goaty endorsement.....wowza 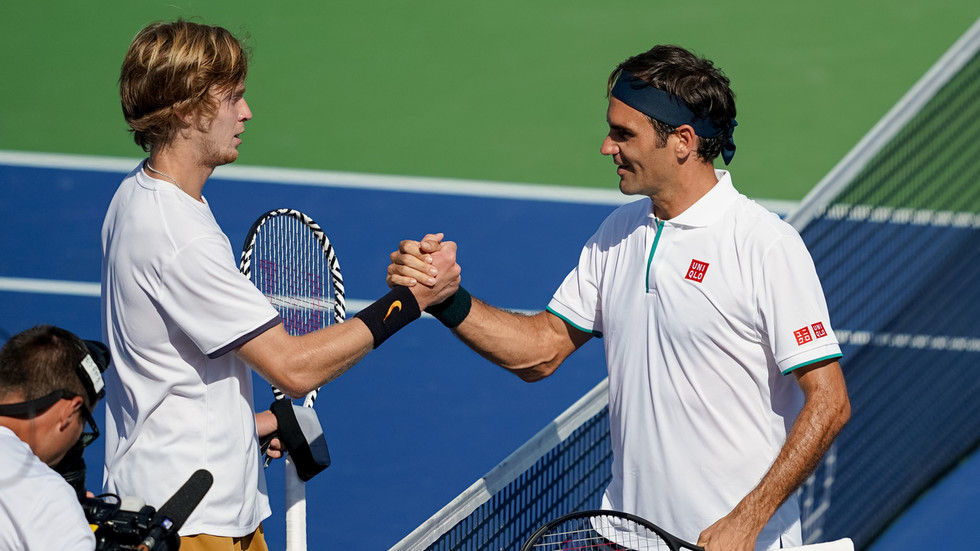 ‘He’s going to be something special’: Roger Federer tips Russian youngster Andrey Rublev as the one to watch in 2020

As seals of approval go, they don't come much better than from Roger Federer. That's what Russian youngster Andrey Rublev received as the Swiss tennis icon backed him for big things in 2020.

Subway Tennis said:
Oh, was that interview quite a while after? I wonder if Rublev had been hitting with Fed during the off season, and that may have prompted Fed tipping him?
Click to expand...

No, most of fedr’s “offseason “ was his greedy Americas tour that featured Zedraffe as pigeon and left him ill prepared for AO.


[why this thread inactivity. digraceful]

All quiet around here.

Show me some hype.

Sysyphus said:
All quiet around here.

Show me some hype.

Hoping for a doppelgänger final...Real Money vs Italian Counterfeit Money. Agut has other ideas; will the Incredible Hurky also throw a monkey wrench/spanner in the works?

OK that's a great nickname. It even somewhat matches his zombie like walking around the court. If he doesn't have a dedicated thread yet in Pro Match Results imo that should definitely go in the title.
Last edited: Apr 3, 2021

Anyone a bit surprised by Rubles not really problem solving too well at his B-level and unravelling a bit in the Korda and Hurtcash matches? I get he is a bit tired from so much success thus far in 2021, but Miami really was his to lose once Med was eliminated.

Korda was a pretty big struggle at the end of each set with the choking from 5-2, and he wasn’t figuring much out once Korda started teeing off.

He barely tested Hurtcash’s on the FH side at all until 1-5 down in the 1st, by which time Hurtcash was already way off his leash. Point after point after point he was just feeding BH CC or IO FH into Hurtcash’s BH-side. Hurtcash was solid there, able to hit defensive shots deep including a lot to the central-DTL area, far enough away from Rubles’ preferred FH strike zone in mid-ad-court position. Hurtcash’s counter-attacking out of the BH side was excellent.

Sure enough, the movement and stroke weakness was in fact there on the FH side. When Rubles started inside-in FH, BH DTL, he kept him pinned much deeper, broke back and was sorta back in it before drifting off back into robot mode hitting wayyy too much to the BH side again.

having crushed both Federer at his favorite hunting ground, The Real Slam, and Nadal in Monte Carlo, we must now come to the inevitable conclusion that Rublev is the most accomplished NextGenner.

Sysyphus said:
having crushed both Federer at his favorite hunting ground, The Real Slam, and Nadal in Monte Carlo, we must now come to the inevitable conclusion that Rublev is the most accomplished NextGenner.

Great performance yesterday, especially the part where he got his act together in the third. I have to admit though I'm worried he's gonna run himself into the ground this year, especially having played a bit of double here and there and also being entered into Barcelona.

Can't wait for 2hours+ of forehand and inshallah

One for the nuthuggers: anyone notice Rubles kiss some necklace for luck before serving? He did it at 6-2, 4-5 in MC Vs Nadal. I saw in one of the slow-mo zoom images during the match that he’s wearing an alpha-omega necklace, possibly bwehlated?

yokied said:
One for the nuthuggers: anyone notice Rubles kiss some necklace for luck before serving? He did it at 6-2, 4-5 in MC Vs Nadal. I saw in one of the slow-mo zoom images during the match that he’s wearing an alpha-omega necklace, possibly bwehlated?
Click to expand...

I don't know about the alpha, but the Omega actually makes sense

Sysyphus said:
having crushed both Federer at his favorite hunting ground, The Real Slam, and Nadal in Monte Carlo, we must now come to the inevitable conclusion that Rublev is the most accomplished NextGenner.

To nail it down, can we have the RG’14 Boys champion say into the microphone after his RG’21 title match and state clearly, “I am Andrey Rublev, not a Medieval painter or Jannik Sinner.”

Andrey in an embarrassing situation

“We don’t need no stinking racquets!”

Vicente, 2020 ATP Coach of the Year, drops the ball on that one.

Rublev is barely winning his matches now! 3 set affair too!

Rublev against Sinner in Barcelona was not pretty! Rublev this time, lost the match!

I really look forward to the day we can get a Sinner-Rublev match with both injury free and in top condition. Rubles needs a few weeks off.

He's a stiff on clay?

He was visibly not in the best of shapes. Still an amazing run so far this year!

Notorious_Junkballer said:
He's a stiff on clay?
Click to expand...

Yep, a stiff who beat Greek god Tsits on clay for the Hamburg title 6 months ago.

Take the week off, Andrey. There’s no shame being beaten by your Italian Mountain Man doppelgänger when the tank is on E.

this is the best thing since i-don't-remember-when

Sysyphus said:
this is the best thing since i-don't-remember-when

The BWEEH on the volley was epic

Looks like Andrey is skipping Hamburg after reaching the final in consecutive years. Must be focusing on the Olympics.

Rubylev is top dog in Section 2, which means a Joe Kovic encounter in the QFs if the draws are chalk. 1R is vs lefty CC specialist Delbonis, who is winless on grass in 10 matches.

falstaff78 said:
Guys I was at Wimbledon qualies yesterday. Watched Rublev take on Dodig (former top 30, RG doubles champ, Wimbledon 4R). Even though Andrey lost a tight 6-4 in the third I walked away with a new found admiration.

1) the kid is 17 and hits the cover off the ball - absolutely leathers it off both wings! Of the 30-40 matches on offer at Roehampton over the last two days this match had consistently the cleanest sweetest ball striking - all the way from the first game to the last one. (Dodig hits a heavy ball too)

Andrey will obviously fill out and become much, much stronger before he hits his peak years.

2) great height - 6-2 or 1.88 meters - same as Novak. Informally I've gathered this is close to the optimum height for a male tennis pro

3) great movement. Despite the lanky frame he has quick and lithe movement around the court, and good defensive skills. (A couple of slips in the final two games notwithstanding)

5) great sportsmanship. There were a couple of dodig serves which hit lines which the linespeople could conceivably have called out but which Andrey reflexively called in.

All in all it was a complete revelation to see a 17 year old play at this level, with such composure and class. I have every reason to believe we are watching a future top ten player here!!!

(PS I know there's a Rublev thread in GPPD forum but I wanted to create a thread where match results can be discussed)
Click to expand...

Thread and OP bumpity. Falstaff called it! Top 10 and better but a title slump back to Rotterdam this winter.

Overlooked (by me until now, others around here too?) trivial factoid: this was a matchup of consecutive years RG Boys champions; Rubylev in 2014 and Tommy Boy in 2015.

Rublev is somewhat of a mystery to me. I often see him play so damn well and think, no one can withstand the pace and depth of his groundies. Other than Med and Djoker, I can't see anyone defending against this guy but then somewhere along the tourney he can't finish the deal. Helluva player and I'm assuming his time will come.

Was a bit disappointed to see that he's another one of the anti-vax tennis players.