Me being a huge huge huge Sampras fan, I’ve always supported Federer since Pete finished in 2002 and I always saw Djokovic with his double hander and great return as more of an agassi type player. Also Djokovic used to be mentally weak like agassi was. But these last 2 years I’ve started to change my opinion on Djokovic.

Djokovic now is very similar to sampras. More than Federer is In fact. novak has changed these last 5 years. In every department he’s moved more similar to Pete.

Djokovic now has possibly the best serve on the planet. Definitely in the top 3.
His forehand is very similar to Pete. Hit quite flat and it ends points.

His consistency and focus are Sampras like.
But the main thing that stands out is mental strength. Too peas in a pod! Sampras for me has the greatest mental strength ever but closely followed by Novak. So clutch it’s unbelievable. Like Pete use to be.
Then there is style of play. I remember seeing a stat on tv at Wimbledon 2019.

And it proves that Djokovic now really does attack the net and is an all court player. Not just a baseliner and defending all the time.

I actually think if Sampras would have been playing these days he’d have played the same as Djokovic. Pete did have a double hander and was a baseliner in his teenage years.

those videos speak for themselves.

djokovic can not be more respectful to Pete.

Maybe Djokovic's 15-40 performance in Pete's living room last year was in honour of the great man?

A better version of Agassi, IMO, though their backhands and ROS are on par, everywhere else, Djoker is better.

Mash em together and you get Djokovic.

Totally different. Pete and Andre were both offensive players. Djokovic is strictly defense.

I guess you can say Djokovic is probably the only guy with a return as good or better than Agassi, though.

His game is more Agassi and his athleticism is more like Sampras. He got a bit of both I think. Return is good, and probably a bit better than Agassi, and serve is good but not good as Sampras'.

I think the much more important question is:
Is Federer more like Sampras or Agassi?

Druss said:
A better version of Agassi, IMO, though their backhands and ROS are on par, everywhere else, Djoker is better.
Click to expand...

Nadal is kind of adding Majors to his resume i am sort of pretending some are what Courier could have had. Courier not beating Sampras at AO 1995 qf still kills me as i feel he would have beat Agassi in final and how he lost to Bruguera at FO in 1993 and 1994 bugs me.

Similarly Djokovic is perhaps showing Agassi what he could have done had he not spent years worrying about his wig.

Definitely Agassi. Both had an amazing ROS, two-handed backhands, beasts from the baseline, hard courts were their bread and butter, were known to take the ball on the rise, and only came to the net to shake hands. Novak is clearly a better player than Agassi though, and I say this as a massive AA fan. Novak is far more consistent than AA was, has a much better serve, and is miles better defensively/athletically. Not to mention the mental game where Novak is far better there as well.

There really isn't anyone like Sampras these days. His style of game is already considered old-school.
Last edited: Jan 31, 2020

Neither. Djokovic is Djokovic. He started out as an aggressive baseliner like Agassi. But his accomplishments and mental strength is like Sampras. In the 90s, many considered Sampras as boring with his serve and volley and winning all the time. He was shy so didn't get any media traction. Maybe Nole is similar in that regard. But Sampras was a different beast. He will serve second serve aces on breakpoint He has that much confidence in his own serve that made him lethal.

Agassi by far. Djokovic has no similarity to Sampras whatsoever in game style. Literally nothing. The only thing they share is extreme mental strength. It's weird to compare a total baseliner with a poor volley and a two handed backhand to Sampras who was purely a serve and volley player who relied on this serve and came in relentlessly. Oh -- Pete has the GOAT smash, Djokovic's smash is the worst of any of the ATG's. A minor point, but worth noting.

Your claim that Djokovic was mentally weak like Agassi at a young age is very flawed. He was NOT mentally weak the way Agassi was 1987-1992.

Djokovic was strong mentally for his age, just not experienced yet 2007-2010 to regularly beat RF and Rafa.

Your comparison is way off... Agassi hated tennis, tanked often, skipped slams... was unprofessional early on.

He's clearly and obviously more like Agassi. He's very much like Agassi. The fact that he's improved his serve out of all sight and in recent times gone more to net to try and be more aggressive doesn't mean he's like Sampras. Those are adjustments he's made to get away from his more natural, more Agassi like game in order to increase longevity.

Also, the at net thing is something he only really does when he's massively confident, relatively in command, and feeling free. Compare the stat you highlighted from the semi final to the final, where in essentially 6 sets of tennis as opposed to 4, he played considerably fewer net points, and had a lower percentage of success. It's not natural to him, and he's not going to turn to it again and again when his back is against the wall in the way that Sampras would do. Agassi could get to net to if he needed to, certainly for a good old drive volley, and like Novak he also got better at it as he got older.

Djokovic has Sampras's athleticism (more than that, in fact) combined with Agassi's playing style.
Although they exhibit their athleticism in different ways - Sampras with jumping smashes and sprints to the net, Djokovic with side-to-side sprints, insane flexibility, and sliding into his shots.

I think Federer is nothing like Sampras. Sampras and Djokovic have that clutchness that’s so so rare.

Sampras on the forehand and Agassi on the backhand

I guess you can say Djokovic is probably the only guy with a return as good or better than Agassi, though.
Click to expand...

You actually said something complimentary about Djokovic, Booger.

SamprasisGOAT said:
I think Federer is nothing like Sampras. Sampras and Djokovic have that clutchness that’s so so rare.
Click to expand...

Federer in his prime had that same calm efficiency in big points.

King No1e said:
Federer in his prime had that same calm efficiency in big points.
Click to expand...

Not so sure. I also think federers groundstrokes are way more spinny and Djokovic hits a much flatter ball like Sampras did.

SamprasisGOAT said:
Not so sure. I also think federers groundstrokes are way more spinny and Djokovic hits a much flatter ball like Sampras did.
Click to expand...

Djokovic's FH isn't that much flatter than Federer's.

King No1e said:
Federer in his prime had that same calm efficiency in big points.
Click to expand...

Yeh when playing Roddick. Went walkabout against nadal and Djokovic

It really is. Flatter and lower over the net.

His serve is solid and reliable but certainly not the best... Also his volleying is not that great.

Djokovic' playing style is more similar to Agassi's, even though he idolized Sampras. He said that himself.
R

Gamestyle more like Agassi but personality more of an alpha and natural winner like Slampras. Not a despondent whiner like Andre complaining about the privilege of playing tennis his whole life

None of them look remotely alike. Pass me your stash, it must be some heavy s-it. Zero resemblance anywhere. 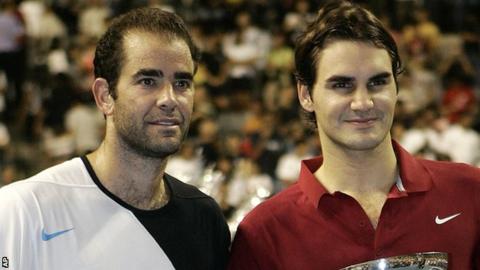 BeatlesFan said:
None of them look remotely alike. Pass me your stash, it must be some heavy s-it. Zero resemblance anywhere. 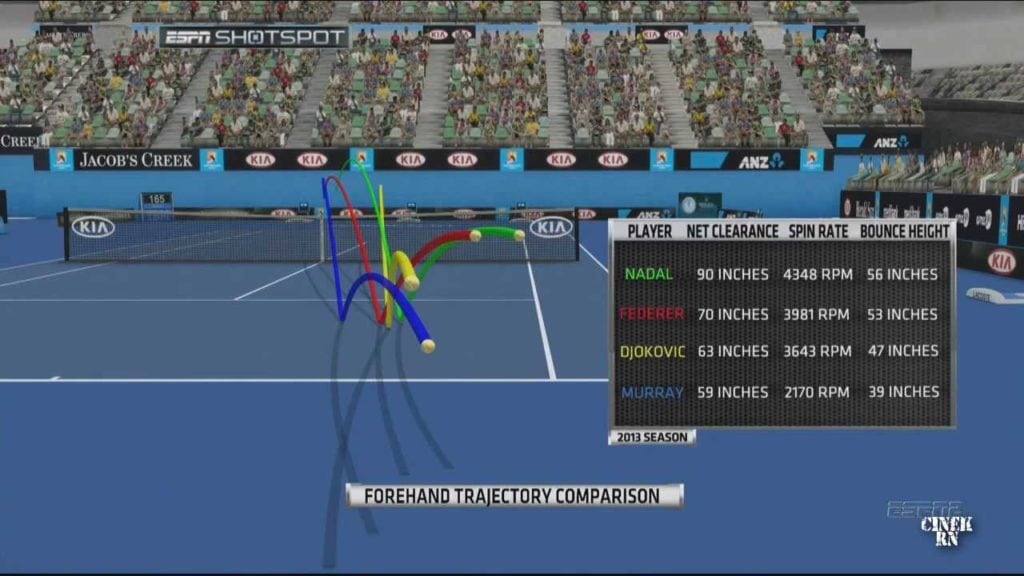 LOL at how flat Murray's is compared to the others'. That's what I'd call a significant difference.

a superior hybrid of both

Playstyle, obviously more close to Agassi, a superior prototype.
About keeping his hair on, nothing to do with Agassi

Did you not have a response to the net clearance statistics I post that proved I was right?

SamprasisGOAT said:
Did you not have a response to the net clearance statistics I post that proved I was right?
Click to expand...

Just checked it.
I stand corrected.

Thanks. You Nole fans are great I might join you in the big 3 trolling.

SamprasisGOAT said:
Thanks. You Nole fans are great I might join you in the big 3 trolling.
Click to expand...

Better hop on the Djokotrain soon before Thiem makes all of them irrelevant!
S

He is the best returner of all time. So Agassi is a better comparison. His second serve is Sampras level though.

Novak is a bit hot tempered. I’d say opposite to Sampras.
Z

As much as I love Djokovic, he’s not a true grass court player; therefore, one cannot compare him to Sampras.

Oh somehow I thought it was about the grass. Even so, he’s far more on Agassi’s side than Sampras’ gamewise.

Sampras was the most clutch I have ever seen. Nole comes very close but he needs certain circumstances whereas I felt Sampras was clutch under any circumstances.
Last edited: Feb 14, 2020
Z

Sudacafan said:
Novak is a bit hot tempered. I’d say opposite to Sampras.
Click to expand...

Novak is riled up easily, yes but he’s also able to control himself.