Is this reverse slice serve?

Heh, so once in a while I will hit a serve like this, but it's really an accident when I do... for me, it's a result of getting the timing of my serve swing wrong and pronating too early before contact of the ball... it does produce some entertaining happy accidents though... particularly in the deuce court (I'm a lefty). If I do it while serving to the ad court, the ball is likely going to be wide of the T...

It was certainly a painful serve
K

One of my managers from 38 years ago had this serve. It didn't have a lot of pace on it like Rosol though.

My current partner can serve slices lefty or righty but you can see which arm he's serving with to know which way to move.
D

Great serve, looks like he's using a semi-western grip but he's holding the racket so the face is in the same position it would be if it were continental, probably for disguise. That would be a great serve to serve and volley behind.
T

It looks neat, but not sure how good it's for the shoulder.

Dan R said:
Great serve, looks like he's using a semi-western grip but he's holding the racket so the face is in the same position it would be if it were continental, probably for disguise. That would be a great serve to serve and volley behind.
Click to expand...

How to hit this serve?
It looks like he is hitting at 9 o'clock and then some weird spastic shoulder movement. 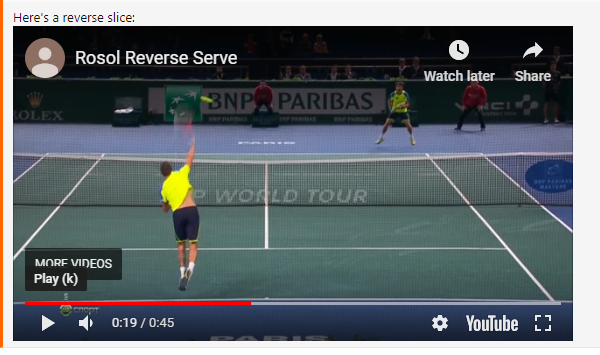 Raul_SJ said:
How to hit this serve?
Click to expand...

The way I do it: When I come through "trophy pose" I switch my mind to a different situation: "overhead forehand".

Sir Weed said:
The way I do it: When I come through "trophy pose" I switch my mind to a different situation: "overhead forehand".
Click to expand...

It looks essentially like a lefty slice serve. But executed by a righty.
It looks like he is coming around the left side of the ball and then carving around the front.
Somethnig really weird is going on... Would be a fun serve to throw in once in a while. 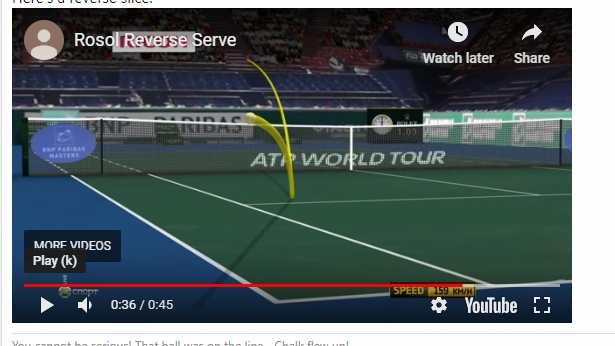 Pronate forearm so that the racquet face makes contact with the left side of the ball. Not weird at all, IMO. Maybe it's not that weird to me because I do all sorts of volley mini tennis games during warmup with plenty of trickshots, bs and experimentation.
C

Regarding differences. This serve below is a high level technique, not a reverse slice. It is also to the deuce court not the ad as the Rosol server. Compare angle of ball trajectory, hand path and racket head path for both type serves. 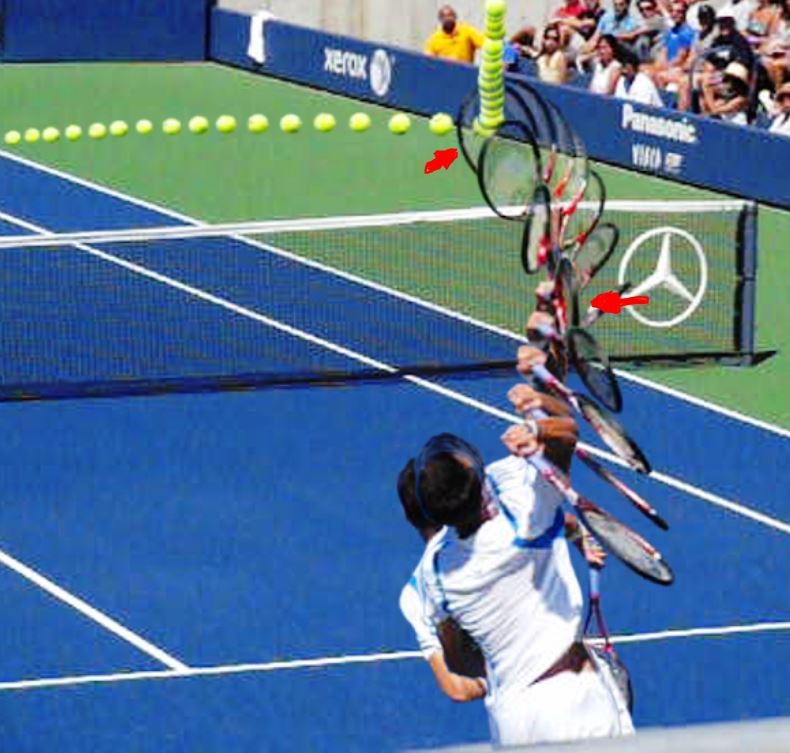 Comparing a serve in the deuce court to one to the ad court is not the best comparison. Anyhow,

Notice for the usual high level serve:
1) Hand path angle to the right of the ball's trajectory.
2) Racket path is to the right - less than the hand - and the racket head rotates clockwise as viewed from above.
3) The resulting ball trajectory to the deuce court target.

For the Rosol serve:
1) Hand path more toward the ball than the serve above.
2) I believe that the arm does pronation plus ISR, in some unknown mix, need better video.
3) The resulting ball trajectory to the ad court target.

I think the different hand paths are important and are not often considered for serves. The rare above camera view is very useful for showing these paths. (I think the same thing for the Waiter's Tray technique.)

I don't like to use what I do for the reverse slice because mine is slow, but I rotate the racket head the same way and go across the ball's left side. The racket head rotation is similar. Hand more at the ball not like the standard high level serve shown above. My reverse slice has little pace but the bounce gets mistakes. It is especially good after the returner has nailed two returns. I use it maybe 3 times a match so that the returners of my club won't catch on. Sometimes I get a mild golfer's elbow injury pain when I do the reverse slice.
Last edited: Aug 30, 2019

Sir Weed said:
The way I do it: When I come through "trophy pose" I switch my mind to a different situation: "overhead forehand".
Click to expand...