TheNachoMan said:
I didn't have Tim in mind

Lleytonstation said:
Just cozied up to him for later use. Just like the gift set in the final last year. Got to keep the kid coming back for more right?
Click to expand... 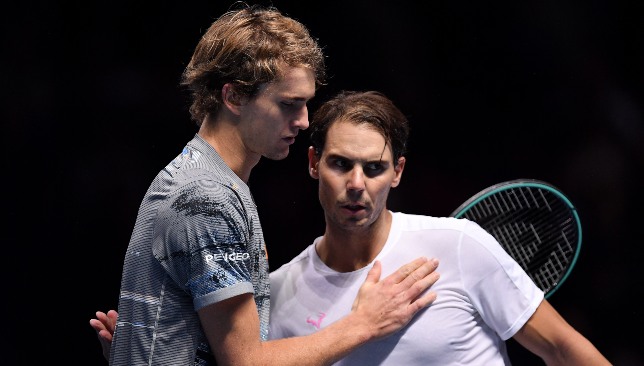 The Green Mile said:
Just noticed that the six times Thiem has lost at the French Open, five of them were to Djokodal (Rafa 4, Novak 1) and a tight four setter against Cuevas in 2015. It seemingly takes the best in the world to stop him at the dirt major.
Click to expand...

Hitman said:
Thiem is vulnerable, yes, but in best of five on clay, he has only been losing to the very best on clay. And at RG, that is what counts.

For me, as I mentioned in another thread, my concern for Thiem is more about the mindset heading in. Is he hungry?
Click to expand...

How can the world #3 not be hungry?

Mike Sams said:
How can the world #3 not be hungry?
Click to expand...

After Sunday all bets are off on Thiem's state of mnd; he himself is not sure how he will react. Hopefully the assassin that took out Meddy returns to his favorite surface and mixes it up with both djoko and nadal, but his head may not come out of the clouds in time.
M

Meles said:
returns to his favorite surface
Click to expand...

Is RG hard court now?
B

She's the champion of the 2020 Kentucky Derby, the symbol of Poseidon, the great deceiver of Troy, and the founder of Marks & Spencer

The Green Mile said:
Just noticed that the six times Thiem has lost at the French Open, five of them were to Djokodal (Rafa 4, Novak 1) and a tight four setter against Cuevas in 2015. It seemingly takes the best in the world to stop him at the dirt major.
Click to expand...

This, for the umpteenth time, does not mean the guy would've won against lesser competition, and the numbers in this case indeed tell a different story. As I've pointed out Thiem was statistically underwhelming in '18 and '19 when he respectively won 56.1% and 56.3% of his games on clay. His career high actually came in '17 when he won 58.4%, and while this conversion rate isn't bad per se it still pales in comparison to that of other non-FO champs from years past. See for yourself:

Again we're looking at guys who failed to win a single FO, or even reached a FO final. And this was against the entire field, not just Djokodal or whoever was tops back then, not to mention that apart from those two* only Cilic has come close to achieving the 60% milestone after 2015 (or that the depth of CC competition has been on a downhill trend since the '90s - follow the below link). There's nothing in these #s that suggests Thiem wouldn't have struggled to win RG in previous eras if not for Djokodal.

So what's his problem then? After all the guy is arguably the biggest hitter active today, right? Well, turns out returning 15 feet from behind the baseline may not be a winning strategy even on clay when your name isn't Rafael Nadal:

So only in '17 did he ever crack 30% in return games won. To put this in perspective it's historically been the 40% threshold that all but guarantees the player a FO in the year proper or some other year. In short Dominic's return position is not a choice or preference but a necessity. His long backswing off both wings leaves him vulnerable to redlining opponents even on clay, and while Rafa can afford to stand far back thanks to his unmatched footwork and agility (though even he's been trying to shorten points in recent years) Thiem simply can't match him in either area to be able to get away with it.

TBF the guy is still 27 and may well go on to surprise us now that he's bagged a major, but even if you buy the standard talking point (I don't) that the increasing physicality of today's game has made it favorable to veterans, dirtballing most likely remains a young man's game and Thiem probably has 3-4 more years tops for a realistic shot at RG.

*Not that Novak himself has been such a world-beater of late. Here are his own %s of games won on clay since 2016 when Thiem reached his 1st FO SF:

Again not bad by any means, but pretty mediocre by championship standards. Now Djoko's career average stands at an impressive 58.8%, which would be the envy of almost any dirtballer apart from Rafa, Borg and probably Lendl, but his level has always been fairly steady and he falls short of Courier and Bruguera in season peak or Kuerten when redlining, let alone those CC giants. And suffice it to say Fed was barely a factor from '16-'19 (skipped '17 and '18 altogether, won just 55.0% and 56.4% in '16 and '19). Yet more reason to be skeptical of the Thiem hype. 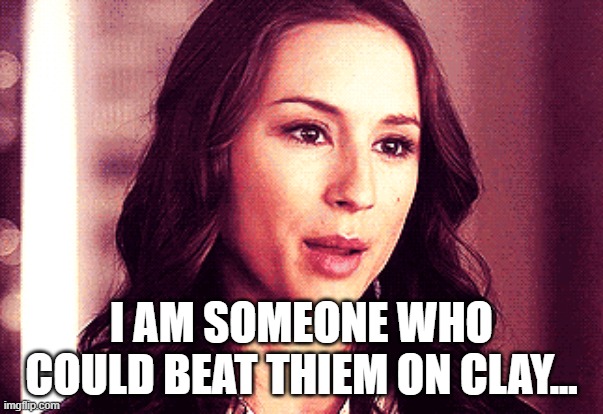 Another poorly ranked player gave the HC specialist a run for his money on clay....

Dizzam Garbine looks so damn good there could be because she is next to gumby but will look up other pics for confirmation.

Lleytonstation said:
Another poorly ranked player gave the HC specialist a run for his money on clay....
Click to expand...

What it tell us

I Am Finnish said:
What it tell us
Click to expand...