It was Nadal's 8th title at the event. Zverev had been the defending champion. Zverev had recently won Madrid without loss of serve. Nadal would go onto win the French Open shortly after

Match Report
Fine and interesting match with clear cut divisions of who has run of play. Both players get a run of dominating at their best, without the other playing too badly and Nadal switches tactics to coming to net to finish (as opposed to 'bossing' from the back) to wrap things up

In Phase 1, Nadal is at his very best, but its a bit different from his typical style due to Zverev's very strong BH

He has to stay sharp defensively against Zver's powerful FH dtl shots - and does
Neutral rallying is excellent from both sides, particularly Nadal. He leads with BH cc's to breakdown Zver's FH. Very rare for Nadal to do that, but its smart. The Nadal FH - Zver BH rallies seem to favour Zver, who is considerably harder hitter and apt to gain control of points, but same proves true on other end: Nadal is slightly harder BH cc hitter than Zver's FH cc... and largely breaks the side down

Very rare for both BHs to get the better of their opponents FHs. Particularly impressive is Zverev's BH outhitting and bossing the heavy Nadal FH. On flip side, the battle is lower quality (it'd be hard not to be), Nadal biffing balls hard, Zver being pushed into defensive or at least reactive position and eventually, coughing up errors

Some 'blinking' by Zver but far more credit to Nadal, especially since it deviates from his preferred FH cc'ng to breakdown right handers BH

In Phase 2, Zver is at his very best with Nadal blinking a bit

On top of tightening up his FH, Zverev continues smacking BHs and is able to dictate play so that his BH cc is the lead shot and Nadal is pushed back on defensive against the powerful shots. Zver also goes for and makes some daringly low percentage shots. I'd have called them 'stupid' had he missed

Near end of 2nd set, Zver takes to coming to net after big groundstrokes to finish points quickly and dispatches a bunch of OHs. Continues the same way to break to start the 3rd (he breaks Nadal's first service game in all 3 sets) and is up 3-1 when rain halts play briefly

Nadal comes out of if playing a different game - hammering groundstroke, following it to net and winning the point there. Similar to how Zver had finished 2nd set. And that's the match

Its likely Nadal switched gears after consulting with his team over rain delay. He's at net twice in game before delay too, but the particularly powerful groundie + approach routine only starts after. Zver serving out 2nd set in that fashion could also have put the idea in his head

For Nadal, whose made a career out of hitting FH cc's to either breakdown right handers BH or drawing weak ball that he can attack, it comes as a very rare sight. Its justified. Zverev has substantial hitting advantage on the BH over Nadal's FH

UEs spring out of the contest read Nadal FH 11, Zver BH 9... top quality ball striking on the BH from Zverev

UE counts are fair indicator of play. Zver's FH is the weakest (both hitting and consistency wise) shot on show and the only one that's less than high quality. Not much less mind you, its not weak or anything like that, but handily outdone by Nadal's BH. Nadal's BH is also impressive. He takes ball early and hits it hard

Nadal has other options with the FH. In phase 3, he goes for big, attacking FHs (as opposed to heavy, neutral shots) straight off and charges net behind it. Also uses FH inside-out as a killing shot when he's drawn weak ball - with which he has 4 winners. For that matter, he hits BHs more aggressively too

Key to phase 3 is Nadal coming to net to finish. He finishes 21/26 or 81% at net, with impeccable volleying. There are stretch volleys and low volleys and drop volleys from under the net and reaction volleys. Zver's no pushover on the pass, fires the ball down or throws up tricky lobs, but Nadal proves upto it at net. He's even got a sky hook winner. He hit a winner in the '05 French final with it too. This type of play is very different from Nadal's norm of bossy baselining - moving opponent around or continuing to pound down BH for errors

At other points in match, Zver has as much hitting advantage over Nadal as Nadal does over him in phase 3. He also toys with coming forward, but is poor on the volley. 3 UEs in just 21 approaches (Nadal has 0) and Nadal also passing with typical precision even when seemingly up off balance and out of position makes it not such a good idea for Zver. He doesn't need to unduly as he's quite capable of pounding Nadal down from the back - which is what he does in phase 2

Other stand out is Nadal's returning, getting 81% serves back, against a powerful serve. Zver's rate is higher still at 85% but he's facing an average serve - no aces from Nadal and 7/11 return errors drawn marked unforced.

Summing up, excellent match that goes in clear phases of dominance - Nadal at start, Zverev through the middle and Nadal again to end. Nadal does well to return the big Zverev serve and deny freebies or even too many advantageous starting positions and is typically vigorous in running down balls when he can't. Both players lead with powerful BH cc's to pressure out or beat down the others FHs... Zverev's BH is the most impressive of the shots on show, but his FH is the weakest too. And Nadal is superb at net, often against powerful passing, to put himself over at the end

Going on this match, pretty good prospects for Zverev to topple Nadal in due time on clay, resting on his BH being able to comfortably handle Nadal's stock FH cc based game

My only memory of this match is the rain dance Rafa did some time in the 3rd.

This was such a good match, and Nadal's kit was epic 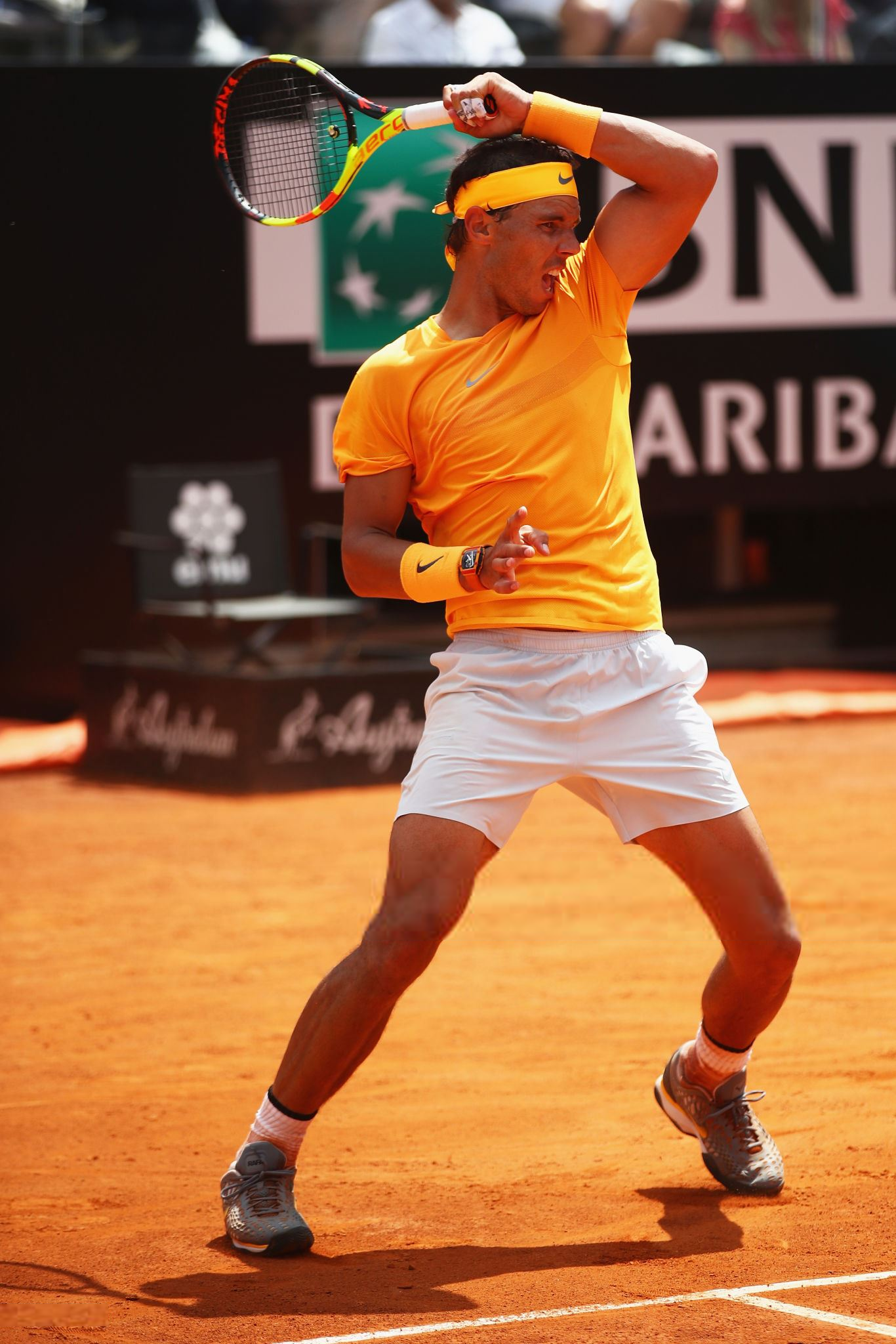 MeatTornado said:
My only memory of this match is the rain dance Rafa did some time in the 3rd.
Click to expand...