Nalbandian isnt the fatty, Groenefeld is!

they need to change her name to Groenefat!

Yeah, she hated that her coach told her to weigh herself three times a day. Since she split she started to eat everything she liked. This is the result.
N


After dropping from a career high of No. 14 last year to No. 204 following an acrimonious split with her former coach, Anna-Lena Groenefeld (right) is trying to rediscover her drive for the game with new coach Dirk Dier.

Sintra, PORTUGAL—Returning to competition after almost four months, former No. 14 Anna-Lena Groenefeld played her first official match in a small $25,000 ITF tournament near Lisbon last week – and lost.
Still trying to recover from a downward spiral linked to a vicious feud with previous coach Rafael Font de Mora, the German showed up last week in Portugal as the world No. 204 and was defeated 7-6 (4) 6-4 by Croatian qualifier Ana Savic. It was her first match since losing to Tsvetana Pironkova in the second round of the WTA Tour Tier IV event of Stockholm

“My biggest goal is to bring back her love for the game,” said her current coach, Dirk Dier – a former ATP pro who met Groenefeld while working for the German Fed Cup team with captain Barbara Rittner. Dier and Groenefeld have been working together for one year.

“If she comes out of this difficult period, she’ll be stronger than before,” said Dier. “It’s not easy playing in all the biggest tournaments and then coming back to the minor league.”

He described the process as one that required physical and mental rebuilding. After Stockholm in early August, Groenefeld took a few weeks off and slowly began training again. “We don’t want to come back too early, and we are setting our sights in starting playing regularly again from January on,” said Dier. “But the situation is not easy. We are working on everything, technique, fitness; we’re also working with a sports psychologist.”

At Wimbledon this year, Groenefeld accused Font de Mora of taunting her during matches and giving her opponents tactics on how to play against her. Groenefeld parted ways with Font de Mora in September 2006, a decision which angered the coach. They allegedly sued each other, and the conflict caused Groenefeld to lose her confidence and gain substantial weight in the process. “It’s in my head, but I have to deal with it and have to get over it. And I don’t want to go down to his level,” she said at Wimbledon.

In Portugal, Groenefeld, who declined to be interviewed, showed only glimpses of the form that took her to the 2006 French Open quarterfinals. Occasional big serves and forehand winners were mixed with frequent errors – particularly out wide to the forehand, – slow-footedness and a lack of patience during rallies.

Savic, an 18-year-old ranked No. 670, has the trademark Croatian big serve – she fired 9 aces. Groenefeld hit 3 aces but double-faulted 7 times.

Anna-Lena Groenefeld proved hit-and-miss in her attempted comeback at a challenger in Portugal.

Groenefeld went up a break in the first set but could not keep the advantage, losing a tiebreak after a controversial call gave Savic the lead. A single break in the second set allowed the Croatian to wrap up the match.
A few days after Groenefeld accused him publicly, Font de Mora responded through Spanish newspaper ABC. “She was 700 in the world when we first met and was overweight because she was eating everything on her sight; she had no talent, but a lot of power. We had to go through a comprehensive preparation plan; it was hard work,” he said.

After four years together in Scottsdale, Arizona, she reached No. 14 in the world under the Spanish coach, who said he was then turned upon. “The German Tennis Federation, after I had done all the dirty work, wanted to own her. Between them and her family, they tried to break a contract that had just been renewed for three more years. So, I’m taking her to court because one cannot send one’s work to the garbage like she and her people have done.”

Font de Mora also said that Groenefeld’s claim that he was coaching her opponents was “absurd.” He was seen at her matches during the French Open.

“With all those kilos, she cannot play, [and] she’s with people that do not understand what they’re doing and she does not have the personality to get out of the situation. And this thing will cost her a million dollars plus the expenses of my American lawyers, who are the same as Bush’s and charge $1,000 per hour. She’s crying to the press, but one thing is evident: results don’t lie.”

Dier did not want to comment on Font de Mora’s allegations. “I don’t want to talk about him. Anna-Lena was a good player before, if not she wouldn’t be able to crack the top. Maybe with another coach she would be 10 instead of 14 and maybe she [would] still be there.”
C

it is really to bad, she was quite stunning when she was at the top of her game. I hope she can make it back.

Her former coach does not mince words in the article above, he sounds like a bit of a punk, but as he said results dont lie
M

Her Coach is right. Plain and simple. Groenefeld is mentally weak. What would Krajicek say about this.

I've never read such venomous statements made about a coach's former player. It makes for great drama. If she makes it back to the top 50, it'll be curious to see if her former coach follows her around, tipping off her opponents.

What would Brian Boitano do?

she needs to go on a ravioli diet.

she used to be skinny

”If people come to me, I’ll tell them how to play her,” he said.

Do they really have good food in Germany? I mean how could she let herself go like that being a tennis pro.

onehandbh said:
”If people come to me, I’ll tell them how to play her,” he said.

What would he tell them? Feed her candy?

This is really very sad, and we shouldn't be making fun of this poor girl.

I'd suggest about 12 weeks of serious lifting and cardio, with light hitting. You can't hit the ball if you can't get TO IT.

also Lisa Raymond is fat as is asha rolle

She is not fat - she is stocky
M

This can't be good for her joints, but she has been going quite a lot. What more can be said? The pic speaks volumes.
A

MEAC_ALLAMERICAN said:
What more can be said? The pic speaks volumes.
Click to expand...

The picture doesn't tell half the story and anyone who thinks it does is kidding themselves.

AndrewD said:
The picture doesn't tell half the story and anyone who thinks it does is kidding themselves.

FYI, this whole story surfaced during the 2007 French Open in another thread, and I am very much aware of her situation. I just feel bad for her, and hope maybe she can get through it.

I have to agree, her former coach treated her terrible and I am sure her weight gain and slip is a result, hopefully her new coach can get her back on track because she has the makings of s great player in her if she can just rekindle something to get her going again.
V

Her coach sounds like a total jerk. There is never an excuse to say some of the things about someone that he did. I'm glad she got rid of him and hopes she does well with her new coach.

Yeah, the coach is a nut. I don't care if she was justified in firing him or not. You don't go out in public and make comments like that, especially about a young woman who probably has self esteem issues (mostly as a result from this).

One day we can only hope that she can look like this again. 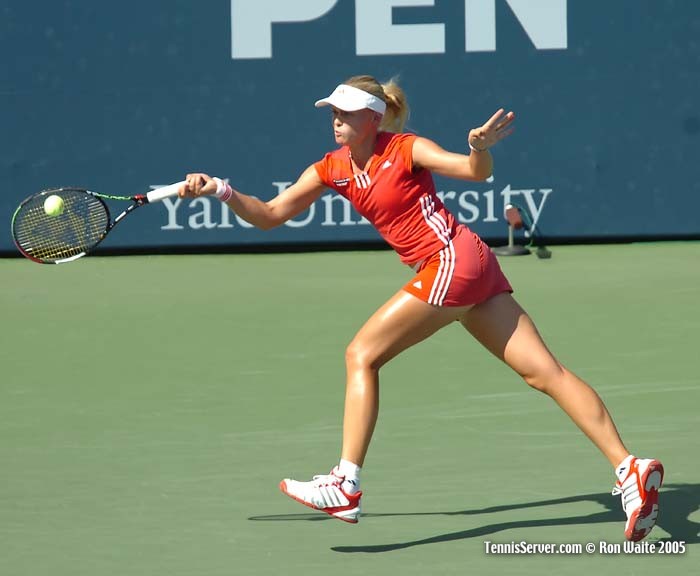