"Novak can be beaten"

Novak Djokovic Can Be Beaten (Seriously)
As the seemingly unbeatable World No. 1 continues his march toward a Grand Slam, here’s how he could actually lose


Wimbledon, otherwise known as the Novak Djokovic Grass-Court Invitational, begins on Monday. Djokovic won last year. And the year before that. Djokovic—in case you’ve been in a dreamy, five-year sleep—wins a lot, more than anyone in tennis. He hasn’t lost a match at a Grand Slam tournament in more than a year, a string of 28 victories that makes him the champion of all four major tournaments at one time. The last man to do that is a 77-year-old named Rod Laver. Perhaps you’ve heard of him.

“The level that Novak is at is something that you rarely, if ever, see,” John McEnroe said in an ESPN conference call this week. “He’s impenetrable in a way.”

Even so, Djokovic will lose at a Slam again. Someday. Somehow. It could be soon! Serena Williams came oh-so-close to winning all four Grand Slam tournaments last year—she needed just two more victories, against steep underdogs—but lost. The Golden State Warriors, a team that hadn’t lost three games in a row in two seasons, led 3-1 in the NBA Finals before losing three straight to Cleveland. Everyone loses. So yes, Djokovic will lose. The question is, when? Here are some handy tips for his potential opponents at Wimbledon.

Ignore Djokovic’s record. Since his last Grand Slam defeat, in the 2015 French Open final against Stan Wawrinka, Djokovic hasn’t had much stress at majors. He has won 19 matches in straight sets, including seven from the quarterfinals on. Just two of his victories lasted a full five sets: one at this year’s Australian Open, against Gilles Simon, and one at Wimbledon last year, against hard-serving South African Kevin Anderson. Don’t think about this. Ever. 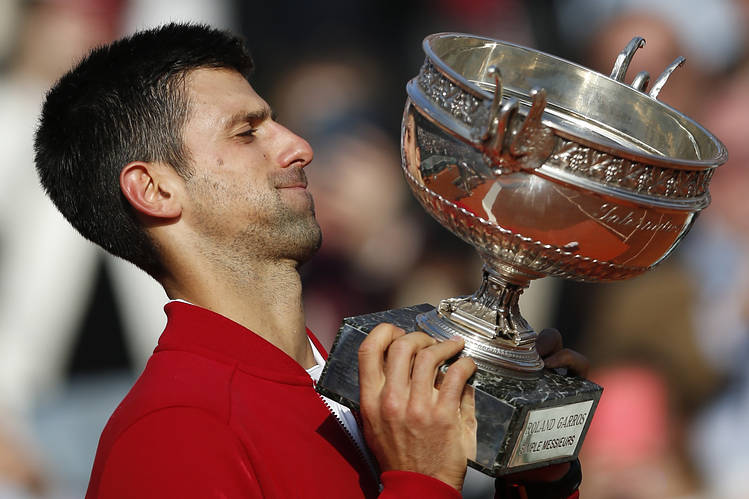 It’s OK to think you will lose.Really. You know the old sports cliché about having to believe before you can succeed? Not true! Just ask Jiri Vesely, who beat Djokovic in Monte Carlo in April. Vesely figured he might as well enjoy his date with Djokovic, which would undoubtedly end in defeat. “I really didn’t think I could win,” Vesely said. “I just went out there.” Then he won the first set and thought, “OK, cool, that’s really something!” he said. He lost the second set. In the third set, he unexpectedly broke Djokovic’s serve. “I was like, ‘Oh, that could maybe be a surprise,’” he said. Surprise! Simple, right?

Pretend it’s an exhibition. Djokovic has played one match since winning the French Open, at the Boodles, an exhibition in Buckinghamshire, England. He lost to David Goffin in straight sets. Goffin is 0-4 against Djokovic in pro-level matches and has a 3-28 career record against top-10 opponents. See how easy this is?

Go for broke. Djokovic’s dominance is simple to explain: He’s very good at everything. So good, in fact, that his astonishing shots often fail to astound—he hits them too often, without any strain and few mistakes. But like any player, he needs rhythm and doesn’t like to be rushed. Anderson showed how effective an all-out assault can be at Wimbledon last year, when he won the first two sets against Djokovic in the fourth round. Djokovic came back to win a close fifth set (7-5) and withstood 40 aces, but Anderson’s relentless attack almost worked. There are other men who could take this approach, like Australian Nick Kyrgios and Canadian Milos Raonic, the sixth seed who recently hired McEnroe as a part-time coach. Raonic could meet Djokovic in the Wimbledon quarterfinals.

Annoy Djokovic and hope he misses a lot. The other five-setter Djokovic won at a major during his streak was against Simon in the fourth round at this year’s Australian Open. Simon is fast and a master of angles. He coaxed Djokovic into 100—100!—unforced errors. Yeah, Djokovic still won. But even he can’t count on prevailing when he makes that many mistakes. Granted, this is an unlikely tactic on fast grass courts, but the principle still applies: Djokovic has bad days too.

Be a healthy Roger Federer. The 34-year-old Federer missed the French Open because of an aching back. He has played two grass-court tournaments leading up to Wimbledon and didn’t win either, but give him almost two weeks and he could be a tough test for Djokovic in the semifinals. Federer beat Djokovic three times last year, but hasn’t beaten him at a major since Wimbledon in 2012. 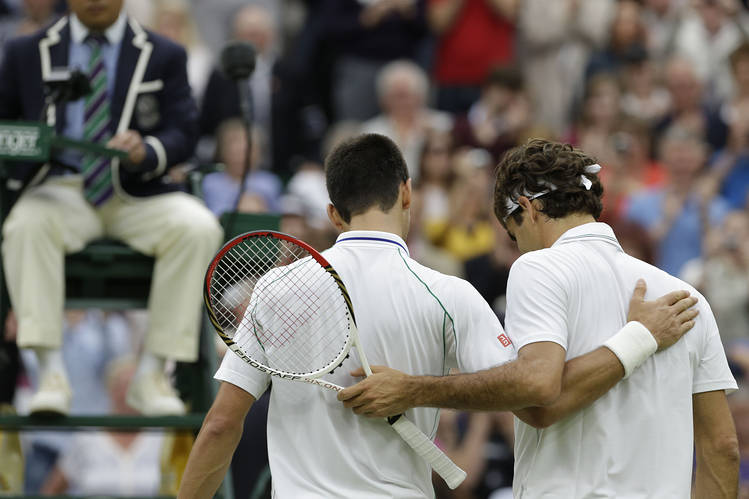 Be Andy Murray. Murray, ranked second in the world, is the man closest to Djokovic right now, and he’s closer than he sometimes appears to be (which may not be close enough, but hey, it’s something). Murray’s career record against Djokovic isn’t very good (Djokovic leads 24-10). Djokovic leads 8-2 at major tournaments. Murray’s last victory against Djokovic at a major came at Wimbledon, in the 2013 final. Back then, Ivan Lendl was coaching Murray. They split up in 2014 but got back together after Murray lost to Djokovic in this year’s French Open final.

I imagine Lendl watching the first set of that final with a defiant, clenched fist. He would have loved it! Murray served aggressively and accurately. He took big cuts with his forehand. He pushed Djokovic behind the baseline and controlled the tempo of rallies. It was as well as Murray has ever played (he won the set 6-3). And then despite the pressure and the horror of flubbing another French Open, Djokovic barely missed the rest of the match and won the next three sets.