What a story that would make for. Two champs bringing down the Grand Slam curtain for 2015.

No reason to think that either one can't do it.

If Fed (just like at Wimbledon) can get through his early round matches without putting much 'mileage' on his legs and get to the 2nd week fresh as a daisy.......and Serena can keep the CYGS jitters at bay, who knows?

Something tells me Fed-Djoko in the finals. As for Serena, just a hunch but I think she gets "the elbow" during the forthnight and comes up a little short - hope I'm wrong.

Would be pretty cool to see them both holding the hardware at this late stage of their respective great careers.

Enjoy these great champions while they're still around.

That said, any finals matchup predictions? ? ? ? 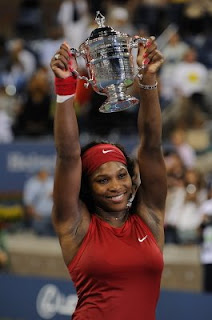