Okay, so we finally have the final we all wanted (Murray and Thiem fans united ). The players have played their hearts out, so now it's our sofa fans' turn to duly predict and speculate and vote.

Do you want to see another La Decima to honour the Pista Rafa Nadal or finally a break through for the young gun?
Last edited: Apr 29, 2017

La Decima year it is.

La Decima, but will have to see

Rafa has been my favourite for years and years. But now I hope Thiem wins. He is playing the type of tennis to my liking and he is good at it. He is young too and tennis need that.
Rafa is strong! So Thiem has to keep cooler under pressure than he did vs Andy, Rafa isn't making many mistakes on his serve.

But let it be shown.

That even the clay kings

Often matches are a battle for the baseline.

Now it will be a battle for the place 8m behind the baseline.

But let it be shown.

That even the clay kings

Thiem is probably Nadal's first opponent on clay this year who actually can make him bleed. He'll need to be firing on all cylinders, but even if he can, as you predict, I think it'll be a flesh wound for Nadal and he'll get his second decima.

Nadalgaenger said:
As a Thiem fan and apologist, I hate to say this, but Nadal in 2. I say Nadal punishes him: 6-3, 6-2. Thiem will be tight.
Click to expand...

I think this will be the first time we will see Rafas true level on clay this year. IF Thiem keeps cool. Thiem should have a chance here.

Both players will be playing from the 3rd row.

Thiem´s days of respecting the elderly are over.

DT in straights, no chokey-chokey tomorrow

This sounds just about perfect. Thiem won't have enough to challenge Rafa.

Red Rick said:
Often matches are a battle for the baseline.

Now it will be a battle for the place 8m behind the baseline.
Click to expand... Definitely should be Nadal's toughest test yet, no? Rafa should have the answers in this baseline slug-fest to whatever a snarling Thiem can throw at him but I'll be rooting for regicide in three for Thiem

Thiem has a chance. Nadal in 2 but would not be surprised if Thiem won.
C

junior74 said:
Thiem´s days of respecting the elderly are over.

DT in straights, no chokey-chokey tomorrow

He can still respect "the elderly" AND beat the hell out of them, you know.

Not that I would want him to do it here though.

Can you not spoil your boy's big final here? We feel for your other boy but let's be clear: Rafa didn't cheat anything, anyone and your other boy didn't lose the match over ONE point in the first set.

You're welcome to write anything you want to promote Thiem here. Imagine if your boy could win against the King on his court! But no trolling pls. Thank you.
Click to expand...

sbengte said:
That's way too much maturity coming from an 8 year old
Click to expand...

Charleneriva said:
Sorry? Who's the 8 year old?
Click to expand...

You mean you aren't really Ms.Federer ?

Krish872007 said:
Nadal in 2 to see @Meles and NextGen in ruins Time to get a clay court lesson from the greatest

Hmm, is this the Roman Forum?

Haha. Okay. You got me. But pls continue to be disappointed.

Pagoo said:
Hmm, is this the Roman Forum?
Click to expand...

You got the reference, right?

Pagoo said:
Hmm, is this the Roman Forum?
Click to expand...

It's the ruins of Dougga, an ancient, large Roman settlement in Northern Tunisia

Krish872007 said:
It's the ruins of Dougga, an ancient, large Roman settlement in Northern Tunisia
Click to expand... 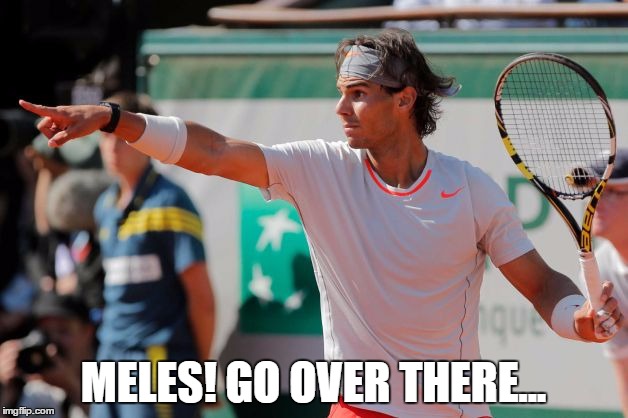 Ive been saying since monte carlo nadal has flattered to deceive and later i think thiem will tear him apart.

Thiem does everything bigger here now in 2017 and with nadals cumbersome movement i can see him getting creamed in straight sets.
Last edited: Apr 29, 2017

Thiem to show he is the better clay court player.
C

At least Nadal is finally playing someone ranked in the top 10, even if it is only Thiem. Has he beaten anyone in the top 5 this year? I guess you could count Milos at AO, but he is out of the top 5 now.

Red Rick said:
Often matches are a battle for the baseline.

Now it will be a battle for the place 8m behind the baseline.
Click to expand...

You are predicting both will suddenly move in closer???

Thiem to win. La decima in Barcelona will have to wait.

The Green Mile said:
Thiem to win. La decima in Barcelona will have to wait.
Click to expand...

Meles said:
This is not some jinx post against thiem.

Ive been saying since monte carlo nadal has flattered to deceive and later i think thiem will tear him apart.

Thiem does everything bigger here now in 2017 and with nadals cumbersome movement i can see him getting creamed in straight sets.
Click to expand...

Nadal 2017 clay likely points level:
Ace% is 4.2% and that is in the realm of possibility given Nadal's serve game the best its been perhaps ever.
First serve % is 67.2% and shows Rafa being more aggressive on first serve which is exactly what he's needed to do.
First serve points won is 73.0% and this is also quite believable as Rafa with aggressive serving in 2012 won 75.1%
Second serve points won is a highly suspect 62.1% in 2017 which is off the charts versus previous years. 2012 was nice so lets say 58.0% is his real level and this number has been inflated by poor opponents (ranking, plus Goffin and ARV way off at MC boosting Rafa's numbers).
Serve points won is 69.4% this year and that's crazy. Rafa won 68.7% in 2010, so he might end up that level in 2017.
Return points won is 50.4% in 2017 which is another fantasy number boosted by scenario described above. This is not 2008 Rafa. Analyzing his matches he's failed to play any strong servers except for a suspect Kevin Anderson. He's around 58% 2nd serve return points won in 2017 and he may be that good again as generally he's played reasonably mobile players save Zverev and Anderson. The area clearly off kilter is first return where Nadal in 2017 he's over 45% with a career average of 39.5%. He might be as good as 46.0% return points won when 2017 is done.
IN SHORT, RAFA MIGHT BE ON TRACK FOR A MIGHTY 57.0% POINTS WON IN 2017.

Thiem's 2017 numbers on serve all look fairly legit and cover more matches than Rafa. They show some solid improvement over 2016 in 2nd serve points won at 55.7%. Thiem's return game bears further scrutiny with 2017 showing a whopping improvement of over 4% on return points won to 44.2%. Thiem is likely going to end up around 53.7% 2nd return points won (2015 was his best at 53.7%), so this is not the source of Thiem's boosted return points won; its his first return. Thiem in 2015 won 30.5% of his first return points on clay. In 2016 he was greatly improved to 32.9% on first return. Nadal career average leads at 39.5% and Djokoray have checked in around 36.0% in the last two years. 40% first return is devestatingly good. Thiem has outdone Nadal on first return this year in two of his matches with Sugita match at over 67% first return points won and Schwartzman around 57% (Nadal got 50% against the Schwartz). For reference against Murray Thiem won 46% of first return points. (Nadal in 2016 at Monte Carlo against Murray got 32% for reference in his win against Murray.) It seems likely that this great first return number for Thiem is a reality, but his stats are boosted like Rafa's from not playing any big servers. Thiem likely to end up around 36% on first return this year. At RG in 2016 he was at 42% return points won for the event and his highest first return match was just 36.2% against Cervantes. With 7 of his 11 matches in 2017 over the Cervantes number Thiem it appears is making a gigantic leap in first return on clay finally (much like what he did on hard courts last year.) The Thiem return number may be very close to what he'll do in 2017 and that puts him at Djokoray class return game of the last few years on clay.
IN SHORT, THIEM MIGHT BE ON TRACK FOR AN IMPRESSIVE 55.0% POINTS WON IN 2017.

The stats show Rafa as the favorite for this match, but their is trouble in paradise. Here is where Thiem may be Rafa's undoing:
1. Thiem has a big first serve. Rafa's first return numbers should droop as Thiem specializes in punishing average returns; Rafa just getting a lot of first balls in play may not garner his normal success. Rafa's first return numbers are likely to be weak for him in this match.
2. Thiem has highish first serve points won and if he gets hot on serve on clay he's capable of getting over 70% of first serves in play which would give him a better overall serve game than prime Rafa.
3. Thiem has an excellent first return and damaged Murray greatly with it. Rafa's serve attack hinges on a high first serve percentage and points won on those serves. Thiem could easily put him in Juan Monaco serve territory.

Nadal should hurt Thiem on 2nd serve and return points badly. It may not help Rafa greatly on his own serve, but on return if Thiem has a lowish first serve percentage (and it was very low with Murray at 49%) Rafa could break him frequently. Thiem at a minimum needs to find 62% first serving to keep afloat against Nadal (season average).

Very interesting match as this a bit of old school stats versus new school stats on clay. The new school is dominating around first serve and Thiem is a prime example. Old school is winning off a better ground game and solid numbers on 2nd return and serve (Rafa.)

This match probably hinges on Thiem's first serve percentage more than anything. Before Murray, Thiem was averaging close to 70% in his 4 previous matches. With that and Rafa's average play against Zeballos (game not unlike Thiem's, but much weaker), Thiem should win this match in 3 sets if he serves well. It could easily be 2 sets.

All I see is many long rallies where Nadal does nothing but hit to Thiem's backhand.