Who is your 2nd favorite player?

Who is your 2nd favorite player?

A few years ago I might have gone with Delpo, but I'm sticking with Stan. To me he still has the most satisfying groundstrokes to watch.

But he's also my favorite player.

But he's also my favorite player.
Click to expand...

What about this ATG?

Stan/Delpo, can't choose between them.

If retired players count then my answer is now Fedr.

Used to be Tsonga, but I'd have to go with Thiem now

Number 3: I like Fed, and a lot of others, but (if not retired) someone quirky like Dolgopolov.
...
All-time? Way too many to list/rank.

Federer a while ago. Now, probably Del Potro.

Probably John Isner, as an American I have a vested rooting interest but that aside I respect very much his unapologetic support for President Trump.

Additionally I just want to note that although I troll them and their fans on occasion, I do like both Federer and Djokovic very much as athletes and have almost nothing negative to say about either.

And who is my favorite?

Nole! Not sure why he gets terrible treatment from fans, he has been nothing but nice to every fan (and there are a bunch after practices and matches I assure you) every time I have seen him play in person.

as a Federer fan, Nadal. sue me.

Kyrgios, Wawrinka, Thiem, and Murray are the guys that get me excited outside of the Big 3. I try to see their matches when I can. No official 2nd place player I don't reckon.

As a Nadal fan, Federer.

My second favorite used to be Novak but now he has my full heart. These days I’m not sure. 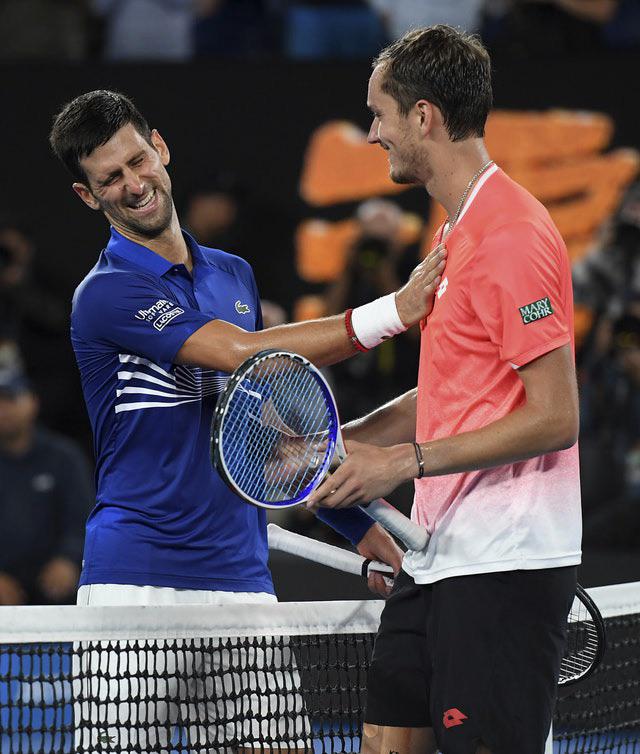 Juan Martin Del Potro. Not sure why he's not on the list in OP.

Hewitt if he still counts

Retired now, but Marcos Bagdatis played an awful lot of great matches in his time. Could really raise his game.

In terms of felt emotion and affection, it would actually be Nadal. But often root against him (then feel sad and bad when he loses)

StANDAA said:
as a Federer fan, Nadal. sue me.
Click to expand...

The OP lists all current players with apparently no clue that many of us have watched tennis for longer than 10-15 years. Where is Borg, Lendl, Mac, Edberg, Connors, Laver Safin... etc?

Don't care for the Federer Djokovic fan wars though.

BeatlesFan said:
The OP lists all current players with apparently no clue that many of us have watched tennis for longer than 10-15 years. Where is Borg, Lendl, Mac, Edberg, Connors, Laver Safin... etc?

To piggyback off my other post, there was a time I didn’t care much for Djokovic. Federer’s losses to him would ruin my day. Around 2010 and 2011 this was most prevalent. Especially since before Djokovic’s ascension, Federer would often get the best of him, many times decisively so.
It wasn’t until 2014 Wimbledon that I gained a newfound respect for him when all the momentum was against him and I truly thought Federer would win that 5th set.
I took the loss extremely hard but the foundation was there to become a fan of his at that point. Add in his great matches with Delpo to add to this, and I always rooted for him against Nadal and usually Murray as it was anyway.
When he hit his down period and everyone wrote him off I often got trolled on here for saying he’d win again. Now here we are and I have become a fan for sure since 2014 onwards.
2019 Wimbledon hurt I can’t lie. Federer has seniority in my fandom and he’s still my top choice. I’ve never actually been able to root for him to lose. The fact it felt like he bottled it made it worse.
I don’t like when Djokovic fans try to downplay Federer or vice versa with Fed fans, but I’ve gone on record multiple times saying if I got into tennis later I’d have been a Djokovic fan first above everyone else. He’s the most like me personality wise and he’s grown up into being quite a good ambassador of the game on and off the court and his gregariousness is refreshing.
At the end of the day, I don’t know who is the GOAT. At their absolute best, the margins are razor thin between the big three. They all have valid cases. Federer at his summit is definitely better than some on here would like to admit, same with the other two.

Very small gaps between these four.

Druss said:
Juan Martin Del Potro. Not sure why he's not on the list in OP.
Click to expand...

I strongly considered Delpo, but as the list was already getting long, he missed the cut because he's injured more than he plays these days.

BeatlesFan said:
The OP lists all current players with apparently no clue that many of us have watched tennis for longer than 10-15 years. Where is Borg, Lendl, Mac, Edberg, Connors, Laver Safin... etc?

The list already had 10 choices which was difficult enough when using current players.......
.......I couldn't imagine the number of selections if I included retired players.

Perhaps you can start a poll for retired players.

Of the players on tour now, probably Stan, but when I first started watching tennis it was either Roddick or Agassi in his early-mid 30's. Hewitt would've been 3rd I guess. After that I didn't really care.

fabio can make tennis look so easy, is talented as fawk, and is a character.