Who was relatively closest to eliminating Djokovic during 2021 RG? 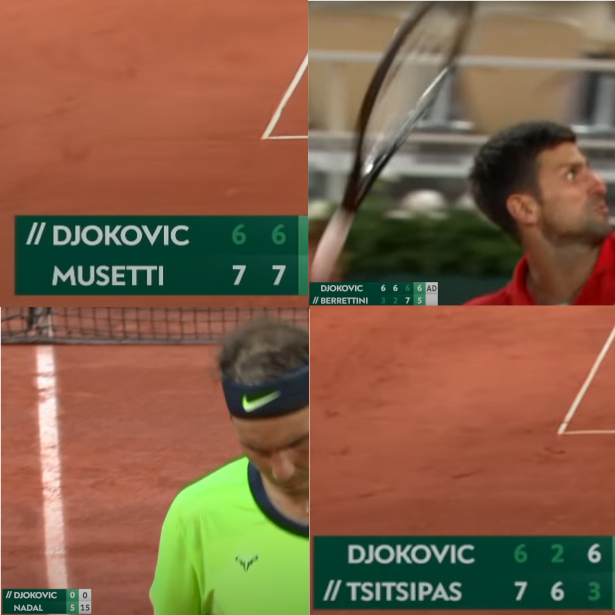 If Nadal gets the bagel, it's a repeat of last year.

None of them. They were all just targets for the Terminator.
T

Antonio Puente said:
If Nadal gets the bagel, it's a repeat of last year.
Click to expand...

Rafa letting him back in the first set. But Djoker wouldn't stop fighting.

nobody, he was trolling all the time, safe from the beginning to the end

Novak probably threw sets so he could come on to TT and see @USO have a breakdown.

Against Musetti: 2 sets down, but as soon as 3rd set started, he was never behind. He just kept breaking his serve and gaining huge leads. Plus Musetti was knackered, he was never really close.

Against Berrettini: lost 3rd set, 4th set really close but Djoko wins it at the last game before TB. He wasn't really close either. Match ends in 4 sets.

Against Nadal: 1st set lost convincingly, then from 2nd set on I can't remember rafa ever being in "control". Djokovic was always the one breaking first and trying to consodilate and Rafa fighting to stay in the set. I guess the 6-5 lead and SP he had in the 3rd was the moment where he was truly in some sort of control since the 1st set but Djokovic was still on serve and served it out for a TB. TB was really close and Djoko won it, then 4th set was all Djokovic. I wouldn't say nadal was closer to the win than Musetti for example purely looking at the scoreline.

Against Tsitsipas: Again very much like Musetti but a much more closer contest since Musetti couldn't be competitive at all due to his legs being gone, Djokovic breaking early in pretty much every set from 3rd set on, asserting control all the way to the 5th where Tsits made him serve it out.

So I would say Tsitsipas was the closest, he was competitive in the 5th and technically only a couple of games away from the win and he forced Djoko to serve it out, however, who knows what would have happened if Nadal won the 3rd set for example.
Last edited: Jun 13, 2021

Poisoned Slice said:
nobody, he was trolling all the time, safe from the beginning to the end