Why Novak's bonus prize money from US open series don't count this year? 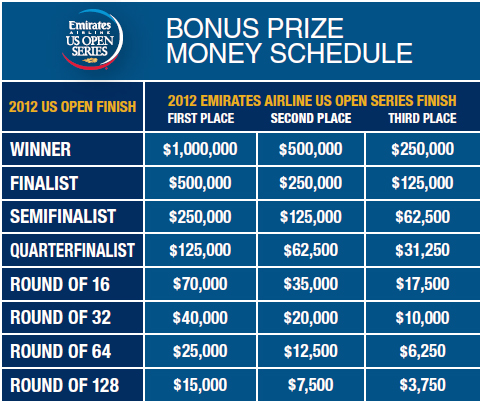 Novak won 500 000 dollars from this years US open series, and that is not counting in this years prize money total on ATP's website.

I know for a fact, last year, and the year before they counted bonus prize money

Roger was second at US open series that year


here you can see that Roger Federer won 525 000$ from reaching semi finals at the US open, and prize money for reaching us open semi finals that year was 400k + 125k from US open series.


So why ATP didn't count Novaks 500K this year?

nobody understood a single word I wrote lol

Achilles82 said:
nobody understood a single word I wrote lol
Click to expand...

We did. The answer is we don't know.

that chart is confusing to me... isn't there a lot of redundant info on there?

Me no do math good

To the OP, if you're going to make a thread, have something that's worth discussing. This thread is NOT interesting at all, thus a waste of space.

TMF said:
To the OP, if you're going to make a thread, have something that's worth discussing. This thread is NOT interesting at all, thus a waste of space.
Click to expand...

Sorry to everyone, I just don't know how to simplify it.

To me it is interesting, because prize money rankings is kind of a big deal.


And I know that each year they counted us open series bonus prize money (which can be up to 1 million dollars), and this year they didn't count it. I just thought (for some reason) that was interesting.

I guess I'm a way to big statistical geek.