Wilson licensed the right to produce and sell oversize frames from Prince which had a patent that gave it exclusive rights to the design for 17 years.

I think the first Wilson oversize graphite frame was the Sting.

Retro remembers correctly, the "Galaxy" came first, in 1981. It's a scaled-up "Ultra" made in Chicago. At 100 SqIn, it's noticeably smaller than the POG.

The "Tempest" and the "Sting Largehead" were developed in California at the same time as the "Galaxy", but became available only in 1982. They were the same size as the POG, and were made exactly the same way as the latter. The "Sting" even adhered to the same grommetless manufacturing protocol as the first generation POG, while the "Tempest" was grommet-stripped and had molded in situ PWS, making it somewhat less head light than the "Sting".

The "Galaxy" had a suggested retail of $350, while the "Tempest" and "Sting" were priced at $250 and $170, respectively. Considering the "Sting" was essentially a POG with a modified throat brace, made in the US by the same people who were making the POG, using the exact same materials, plus the fact that Wilson had to pay Prince royalty for every one of these racquets sold, it was really quite a bargain! The low retail might have been a mistake, in my opinion, as prospective buyers probably thought the "Sting" was an inferior POG-wannabe made with cheap materials, not even half as good as the "Galaxy"...

The "Tempest" was given a modified paint job (basically a mirror image of the original) and rechristened "Javelin Largehead" towards the end of that year (followed by the replacement of the funky "Javelin 95" by the more conventional-looking "Javelin Midsize" shortly thereafter), so it was really only made for one year, even though it continued to be available for years until the old stock was exhausted, obscuring its clonal relationship with the "Javelin Largehead".
Last edited: Apr 30, 2021

Sanglier you're the man!

Does anyone know how the strung weight for the tempest 110?

t-swede said:
Does anyone know how the strung weight for the tempest 110?
Click to expand...

Specs are identical for the Tempest 110 and Javelin Largehead, but can vary quite a bit from one example to the next, as was typical among racquets made this way. Neither model was offered in different weights, so you wouldn't know what you have unless and until you actually measured your frame: 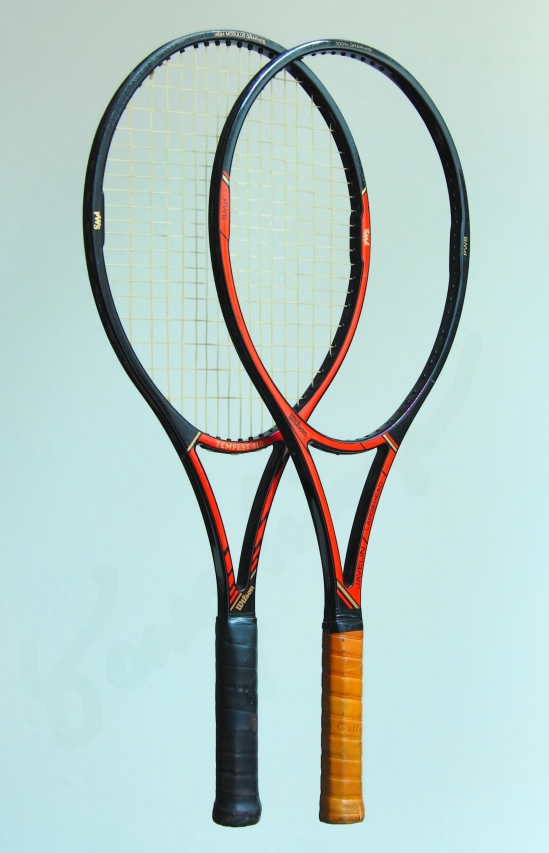 That sw is no joke must be difficult to serve with! Have you hit with this one? Are the rackets in the picture yours?
Regards

Yes, all racquets I've posted here are mine unless otherwise noted. I began watermarking my photos after seeing some of them showing up in other people's fleabay listings. I think everyone should do this before posting their stuff on a public forum.

I've only played with one of my "Tempest"s. It felt very heavy, stable (obviously), and flexible, with noticeable frame vibration. The latter is the only thing that negatively impacted its overall feel for me, as I have a POG that is just as heavy as this "Tempest" and slightly more flexible still (per its RA reading), yet it had very little vibration and felt much more solid on ball contact. This is quite puzzling actually, as frame vibration is supposed to be strongly correlated with flexibility (after all, vibration attenuation was a central purpose behind Kuebler's hyper stiff Resonanz design). My guess is that RA reading doesn't tell the whole story; my POG must be stiffer in just the right spot where my "Tempest" is not; which contributed to their divergent behaviors despite largely similar specs.

Granted, my sample size for this test cannot be any smaller, but I've hit with enough California-made frames of this construction type to know that this particular result is unlikely to be an outlier.

The Pog you're mentioning in your post is that the first Gen with no grommets?

t-swede said:
The Pog you're mentioning in your post is that the first Gen with no grommets?
Click to expand...

Yes it is. However, I should add that this particular 384g POG is itself an outlier; the vast majority of 1st Gen California-made POGs weighed between 360g and 370g, with a flex falling somewhere between 60 RA and 65 RA. Nevertheless, at the opposite end of these 380g plus heavyweight POGs, I also have a couple of flyweight examples that barely topped 350g. So for POGs too, there isn't just one spec, but a range of specs.
You must log in or register to reply here.
Share:
Facebook Twitter Reddit Pinterest Tumblr WhatsApp Email Link
Top