Zebrev said:
Does anyone know if Sascha will be fit for grass in a couple weeks? Did he wlsay anything in his conference?

BTW, where that injury was around his thigh, you can really tell the physical training that he must be put through. No longer looking that lanky giraffe. Gaining a bit of mass and muscle should help stave off these injuries from overplaying in future.
Click to expand...

As I'm sure you've seen he's getting back on track quickly and heaven help the draw if he serves like Madrid.

Can he win this Wimbledon this year ? Can he finally come thru ? He did say in Rome, " This is my Time"

Zverev talks about getting Fed's autograph when he was 5 years old, interesting video.
https://www.atpworldtour.com/en/video/alexander-zverev-my-story

Look at this fellow Sascha believers:

I loved it, especially the family anecdotes of young Z. The pics were pretty good as well, the one with Lovik is so fricking cute, it melt my heart. Thanks for sharing!

Must be nice to have both Lendl and Becker showing interest in working with Zverev. Wonder who he eventually ends up with.

NuBas said:
Must be nice to have both Lendl and Becker showing interest in working with Zverev. Wonder who he eventually ends up with.
Click to expand...

NuBas said:
Must be nice to have both Lendl and Becker showing interest in working with Zverev. Wonder who he eventually ends up with.
Click to expand...

Becker's going through a nasty divorce, so he's not working with anyone for awhile.

BeatlesFan said:
Becker's going through a nasty divorce, so he's not working with anyone for awhile.
Click to expand...

Oh and I heard Sascha during a Tennis Channel interview saying he will not be working with Lendl at this time. He is satisfied with his current team.

Yesterday Zverev won his third title for the season at Citi Open.Also he is the first player this season to reach 40 wins.Highlights of the match plus what he said after the victory

Also forgot to mention that Zverev is again second in the ATP race to London (4085 points).Now he is starting his defense of the Rogers Cup title.He could meet Djokovic in the QFs I believe - hopefully it happens,it will be interesting match.

Zverev: I'm With Lendl To Win The Biggest Tournaments


After losing a five-setter against Ernests Gulbis at Wimbledon, Alexander Zverev began to think it was the perfect time to try something new. At the time, he was No. 3 in the ATP Rankings and had recently earned his third ATP World Tour Masters 1000 title in Madrid.

But the 21-year-old wanted more, and he took a step toward achieving more by adding both a proven coach and player to his team ahead of the US Open: former World No. 1 Ivan Lendl.

“The reason I'm with him is to compete and win the biggest tournaments in the world,” Zverev said. “That's the only reason he would join, as well. It's great having him here. Hopefully it will show in the results.”

Jez Green, Zverev’s fitness coach, worked with former World No. 1 Andy Murray during one of Lendl’s stints with Scot’s team. So between Lendl’s previous coaching success and his experience with members of the German’s team, it was a perfect fit.

“He's a smart man, a great guy. Done it as a player, done it as a coach, so he knows what it takes,” Zverev said. “He knows how to do it. He knows how to make the best players even better. This is why I took him.”

Zverev’s father, Alexander Zverev Sr., is still one of his coaches. But Lendl is another set of eyes and a mentor who can give the World No. 4 insight into the mind of a man who himself won 94 tour-level titles and 1,068 matches.

It’s not that Zverev has been unsuccessful before hiring Lendl. In fact, the opposite is true. The Monte-Carlo-resident leads the ATP World Tour in 2018 with 43 match wins. In second is World No. 1 Rafael Nadal, who owns 40. But to Zverev, Lendl could add that little bit more to his corner to help him continue his ascent.

Zverev will hope his early work with Lendl could pay immediate dividends in Flushing Meadows. One year ago, he was arguably one of the hottest players on tour, fresh off triumphs in Washington, D.C. and Montreal. But his tournament came to a screeching halt in the second round against Borna Coric, his third exit by the second round in three New York-appearances.

“Last year I was a little burnt out,” Zverev said. “Last year I played a lot, I won a lot. Mentally it was tough for me because everybody saw me for the first time as a favorite. That was new for me, as well. Expectations got ahead of me a little bit.

And maybe with Lendl in his corner, Zverev could find his top level at the USTA Billie Jean King National Tennis Center, where he begins his campaign against Peter Polansky. For now, there’s no timeframe on this new player-coach relationship.

“As long as it works,” Zverev said. “If I win the US Open here, it's going to be probably a little while.”

is Lendl making him better already ? Novak better watch out. Misha could upset Novak at the US open

Comes off a bit arrogant in this article but his arrogance should die down eventually. He is still young.

Can make even Rublev smile.

The only one Rublev won't bully (and maybe Kachanov)

Zverev is doing well under Lendl.Another straight set victory at US Open

IMO among all the players, he is looking very good and we will see if Lendl has an effect later in the rounds but if he continues playing like this, he could very well win the US Open.

Having got past Polansky, the title should now be his.

OldschoolKlaus said:
Oh no, now against Kohli :-(
Click to expand...

Another easy match. Zverev has been winning their most recent meetings.

He is just cruising through silently so far.

What's the Zedliest of the Zedly up to these days?

FedFosterWallace said:
What's the Zedliest of the Zedly up to these days?
Click to expand...

On vacation until Laver Cup

Wish this lady was at the US Open women's final 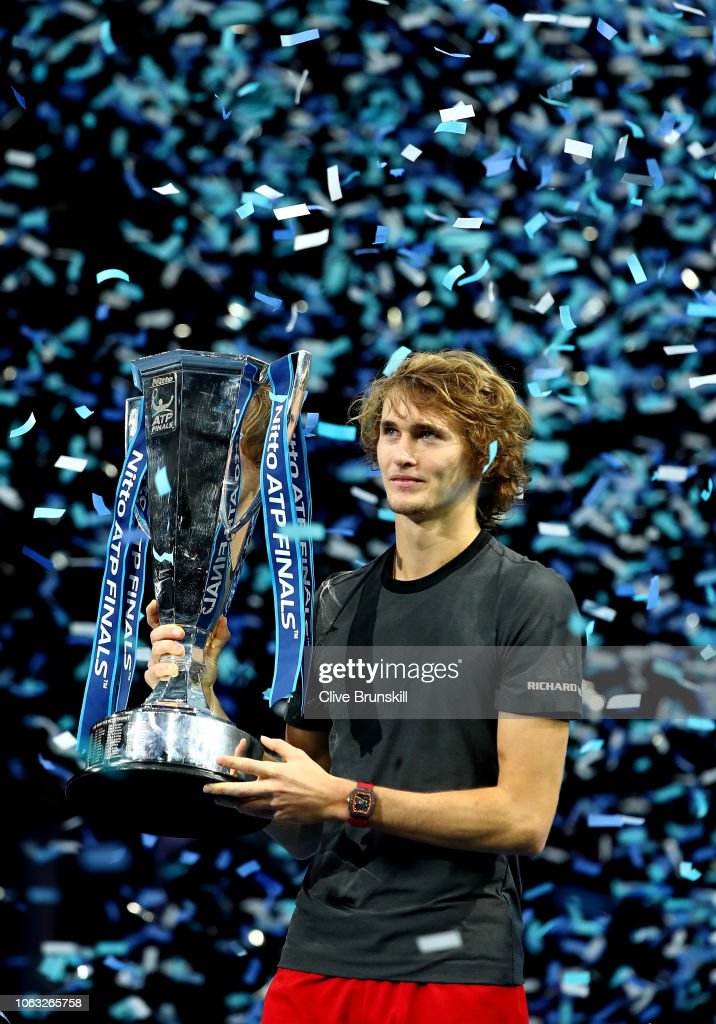 Nostradamus said:
So how many majors will Sasha win in 2019 ?
Click to expand...

Hopefully at least 1 final, but let's not get ahead of ourselves. I want to enjoy this big big big win first, and worry about the GS expectations later

Alba Barragan said:
Hopefully at least 1 final, but let's not get ahead of ourselves. I want to enjoy this big big big win first, and worry about the GS expectations later
Click to expand...

This win is gonna do loads of good for him. Lots of confidence to take away from this. If the Big 3 are not gonna make moves in 2019, next up would be Zverev. 2019 looking good.

Of course, there will now be even more pressure on Zverev to win a slam in 2019 with the WTF win. But I think he'll handle it.

Not the right time but perhaps its time to start the thread, poor Zverev, got destroyed again. He is good enough for that topic.

Congratulations to him. Completely dominated Djokovic in every department.

Hahaha the picture makes them look alike too.

Interesting stat- Zverev becomes the 4th player to defeat Federer and Djokovic in the semis and the final of tennis tournament after Nadal,Nalbandian and Murray.Anyway deserved win for him today.He outplayed Djokovic totally.

NuBas said:
Hahaha the picture makes them look alike too.
Click to expand...